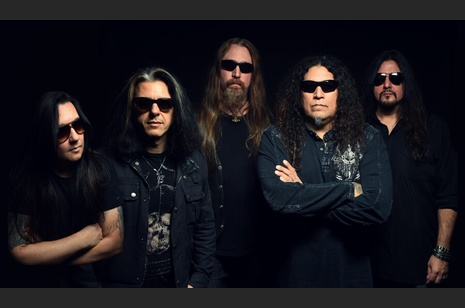 TESTAMENT was one of the first thrash metal bands to emerge from the San Francisco Bay Area in the 1980's. Originally formed as 'Legacy' in 1983 by founding members Eric Peterson (rhythm guitar), Derrick Ramirez (guitar) and Louie Clemente (drums), the line-up included vocalist Steve Souza and Greg Christian (bass). Ramirez was later replaced by wunderkind Alex Skolnick (lead guitar). Souza soon departed to join Exodus and suggested that the towering Chuck Billy take over as frontman. The band became known as 'Testament' 3 years later, while recording their debut album in Ithaca, New York. "The Legacy" was a brutal intro in 1987, putting Testament at the forefront of the flourishing thrash metal scene. Following "Live At Eindhoven", an EP recorded at Holland's Dynamo Festival, "The New Order" in 1988 was well received producing one of the band's most memorable classics "Disciples Of The Watch". Next came the highly successful "Practice What You Preach" in 1989, then the release of "Souls Of Black" in 1990, coinciding with the European 'Clash Of The Titans' tour with Slayer, Megadeth and Suicidal Tendencies. After "The Ritual" in 1992, Skolnick, who was losing interest in pure metal, decided to pursue his interest in jazz and left the band.

Clemente also departed. "Return To Apocalyptic City" in 1993 brought Glen Alvelais (guitar, ex- Forbidden) into the fold, and filling in temporarily for Clemente, Paul Bostaph (ex- Forbidden, Slayer). James Murphy (ex- Death, Obituary, Disincarnate, Cancer) soon stepped in for Alvelais on lead duties for "Low" in 1994, as John Tempesta (ex- Exodus) took over on the drums. Tempesta later left to join White Zombie, and was replaced by John Dette (ex- Evil Dead ). "Live At The Fillmore" was released in 1995, then Dette left in 1996 to join Slayer. "The Best Of Testament" was released in 1996. "Demonic", which was recorded in Testament's Driftwood Studios, was released in 1997. James Murphy and Greg Christian having left the band were replaced by alumni Glen Alvelais and Derrick Ramirez (bass). Gene Hoglan (drums, ex- Death, Dark Angel) lent his percussion talents. "Signs Of Chaos", a 'best of' disc of the band, was released in 1997. Dave Lombardo (ex- Slayer, Grip, Inc.) was officially introduced into the band. James Murphy was brought back once again, and on bass, the legendary Steve DiGiorgio (ex- Death, Control Denied, Sadus). "The Gathering" was born in 1999. James Murphy abruptly departed, which was determined later for reasons due to a serious illness. Steve Smyth (ex-Vicious Rumors) jumped aboard as 'touring guitarist', later to be invited to stay on as a permanent member. Lombardo soon also left, not being able to commit, having other projects on his plate.
In 2000, Jon Allen (drums, ex- Sadus) joined the band. After the successful "Riding The Snake" world tour to promote "The Gathering", vocalist Billy was diagnosed with a rare form of cancer called 'germ cell seminoma' in March 2001. Despite his illness and grueling cancer treatments, Billy offered his ground shaking vocals to the re-recording of Testament classics on "First Strike Still Deadly" with a reunion of sorts, bringing back Alex Skolnick and John Tempesta to record on the disc. Billy has since fully recovered. A busy touring schedule of the U.S. and Europe commenced in late 2002, through the summer of 2003. In 2004, guitarist Steve Smyth left the band to join Nevermore, and "Metal Mike" Chlasciak stepped in. [Compiled by L. Sato with The Billys and Eric Peterson] NOTE: 2/17/05 - TESTAMENT REUNION ANNOUNCED! Original members to play shows in Europe, the United States and Asia.
For a time Testament had a constant line-up with Chuck Billy, Eric Peterson, Steve Smyth, Steve DiGiorgio and Jon Allen, but in 2004 Allen and Smyth (who joined the band Nevermore) decided to left the band. Shortly after this a quick collaboration with Metal Mike Chlasciak and Paul Bostaph followed, but Billy and Peterson decided to unite their first line-up and went on tour with them. In winter 2008 the album “The Formation Of Damnation” was released.
In July 2012 the Bay Area thrash legends, Testament, released their highly anticipated new album, „Dark Roots Of Earth“.
“Dark Roots of Earth“ was produced, mixed and mastered once again by the world renowned Andy Sneap (ARCH ENEMY, NEVERMORE, ACCEPT, EXODUS). Special bonus tracks were recorded, mixed and mastered by Juan Urteaga (CATTLE DECAPITATION, HEATHEN, VILE, SADUS) at his Trident Studios.

TESTAMENT - BROTHERHOOD OF THE SNAKE