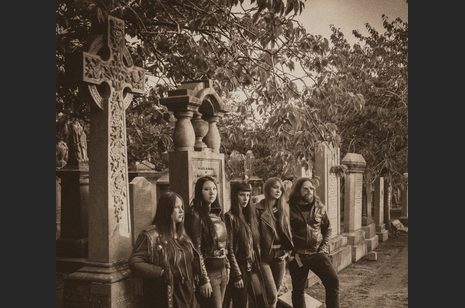 Mist is a doom metal band from Ljubljana, Slovenia, formed in July 2012, originally as an all-female band. They build their music on the legacy of legendary bands like Black Sabbath, Pentagram, Candlemass and others.

The band released their first demo recordings in November 2013 which have been re-issued on CD three times due to great interest. It has also received many promising reviews and radio airplays from all over the globe.

In 2014 they signed to Dutch label Soulseller Records and released their first EP >>Inan'<< the following year. They have performed with several artists, such as Saint Vitus, Jex Thoth, Uncle Acid & The Deadbeats, Orange Goblin etc. They are recording their first full length album this summer, the title is soon to be announced.
We are thrilled to have been given this opportunity! Our first album is coming out this year and we've decided to perform one of the unreleased songs for the first time at BOA. This will be our second time in the UK and we'll make sure it's a blast.