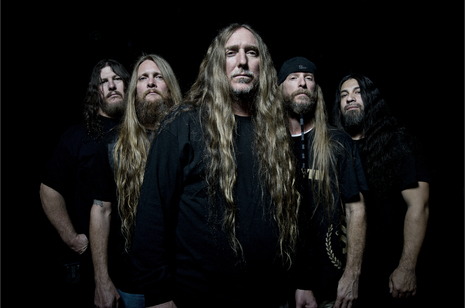 Upon switching their name from Xecutioner to OBITUARY, the career of one of the most successful and influential death metal bands began. Hailing from Florida and featuring brothers John Tardy (Vocals), Donald Tardy (Drums), Trevor Peres (Guitar), Allen West (Guitar), and Daniel Tucker (Bass), the band signed to Roadracer Records, a now defunct division of Roadrunner, for the recording of their debut album, the immense and immeasurably heavy Slowly We Rot (1989). The album was engineered by the legendary Scott Burns at Morrisound Studio, which would come to be the most sought after facility for production of albums during the rise of death metal in the 1990s. Unlike much death metal preceding it, the album had a sludgy feel and integrated devastatingly slow passages along with obliterating overtures that reached far beyond any point of mayhem that metal had yet to reach. The result was a carnal pleasure for doom, death and thrash fans alike coupling the adrenaline of a speedball with the slow, degrading measures of a sewer at dusk. Like them or not, Obituary were unlike anything anyone had heard before.

Slowly We Rot was chaotic, bass heavy mix of manic guitar solos and crashing drums. The album’s defining feature, however, was vocalist John Tardy’s disarmingly horrific, gargling style, that created guttural chasms of dread which, though often mimicked, have been achieved by no one else. Drastically shifting tempos and Tardy’s unique vocal style became the band’s trademarks, which clearly distinguished them from the rest of the burgeoning Florida scene. Nowhere are these two features more apparent than on the prophetic title track of their debut. The fact that OBITUARY refrained from printing lyric sheets with their albums led to rumors that the band hadn’t written any lyrics at all. Even so, any true fans have every grunt, growl and howling shriek committed to memory as if they were blistering utterances from God. What does not exist cannot be remembered, and an OBITUARY show is testimony to the re-creation of what one’s ears couldn’t believe in the first place. The ironically titled live album Dead worked quite well for the quintet, dividing the listeners conscience yet leaving much to the imagination. While such differing sensations once seemed incongruous, OBITUARY have proven their ability to merge unlikely dichotomies, from their slow-as-hell-yet-fast-as-fuck style to the non-evil, homegrown approach to what would largely become the satanized, bastardized, make-up wearing movement known as death metal.

The maturation of the musicians into songwriters taking more visionary and complex forms would soon be heard world wide as OBITUARY took metal by storm in 1990. Despite their youth upon release of their sophomore offering, Cause of Death embodied the confident swagger of the most fearsome pack-leading hound. From the insidious growls of John’s vocals to the barrage of Donald Tardy’s thunderously-metered explosions of double bass, Cause of Death was the intention and method as promised by the early threat of Slowly We Rot; for OBITUARY, death was just the beginning. Accordingly, the title track alone (“Cause of Death”) would be heard, regurgitated, manipulated, complimented and collapsed—but never duplicated—on third and forth generation death metal albums for years to come. Lovecraftian imagery and aural morbidity aside, even a deaf man found fear when confronted by the formidable visage of guitarist Peres; entering Frank Watkins, the hulking henchman of a bassist from South Florida, finally provided long-needed and powerful rhythm stability to the line up. However, the grinding of the axes would not be complete until the return of Xecutioner veteran Allen West, who, along with Peres and Tardy, crafted the foundation for most of OBITUARY’s most primordial and historic moments. Attack now whole, OBITUARY had given birth—sight, sound and feel—to a true horror greater than metal had ever known.

The paradox herein lies that Obituary was anything but a summation to and end, but more an exploratory journey into the infinite dehumanization of all that is known, as confronted brazenly by their best selling release yet, The End Complete and later followed by the cynical and dark expedition of World Demise. Reunited with songwriter West, the band was conjoined like quintuplets sharing life and a name. Though finality was possibly inferred by these titles, OBITUARY was anything but finished. Ironically, the images conjured by songs such as “Don’t Care”, “Platonic Disease” and “World Demise” seemingly foretold of the millennium as can now be seen daily,

displayed plainly across the screens of CNN and reality TV programs world wide; not bad for a bunch of rednecks from Florida with Budweiser dreams and bongwater nightmares. With nearly 3 decades of history under their belt and Massive World Tour planned, OBITUARY is preparing for their most anticipated album due to release in late 2014 via Relapse Records. With the addition of legendary bassist Terry Butler on-board and the knowledge he brings to the table, the band and its arsenal of Iconic members is as solid as ever. With the addition of lead guitarist Ken Andrews, long time friend, local Florida metalhead, and new shredder on the scene, he has create the final piece to the puzzle. With this line up, OBITUARY is ready to take on the world with a 2014/2015 schedule that will put them in front of metal fans on every corner of the planet