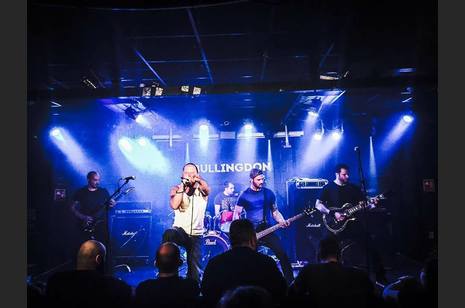 K-Lacura is a 5 piece Metal band hailing from Oxfordshire's well-loved town of Didcot.

Our style amalgamates an array of Metal genres into a boisterous, breakneck stupor that has given us a collection of titles in and around the music scene.
Influences range and can be clearly heard from the likes of Parkway Drive, Soilwork, Pearl Jam, Glamour of the Kill, Periphery, The Sorrow, and Architects to name but a few.
The live shows notched to our belts vary from small intimate venues supporting the local and national scene to crowded, zealous backdrops with large amounts of wattage supporting well-known outfits.

Some of our proudest shows have been supporting/playing alongside Glamour of the Kill Chthonic and Ghosts of a Thousand all at the O2 Academy Oxford on the Cowley road. Although these were amazing we are also extremely dedicated and fond of jumping on stage with bands we've become close to in the local and national circuit.
Determined to surpass previous efforts, K-Lacura have gone all out in creating a complete listening experience that we are extremely proud of on our recently released album Portraits of the Faceless. Our aim is to keep our music firm and fresh and to keep ourselves and fans energised throughout this journey.

Playing a festival, any festival has been a dream of ours from the start of the band 11years ago, and that's what we accepted it as, a pipe dream. We would never have thought that we'd be playing the New Blood stage at the UK's biggest, Independent Metal Festival, just didn't seem possible.

We decided to take a punt at M2TM for a shot at turning this pipe dream into reality. We first played M2TM the year it opened at Nuneaton's Queens Hall and to be honest the band were chuffed to be playing outside of Oxfordshire and Berkshire, we realised that the talent we were up against was immense, but such an eye opener to see so much awesomeness is out there in the underground scene.

So we played year after year after year, and defeat after defeat and finally 2017, 6+ years following our first introduction to M2TM and Mr Simon Hall, we've been fortunate enough to be given the privilege of representing Oxfordshire's metal scene on this year's New Blood stage. Seriously honoured and we look forward to watching many M2TM first timers, and veterans play their way through the competition next year for their shot to play at this amazing metal festival.