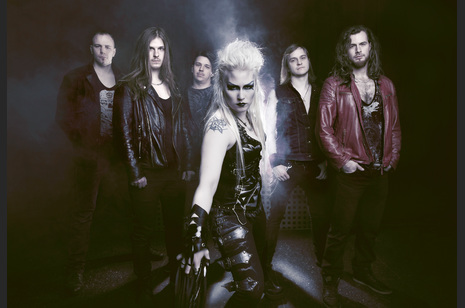 Founded in 2008 on the southern edge of Finland, BATTLE BEAST stands for everything that is good and pure in metal music - crunching riffs, high screams, blistering solos and strong choruses. The sextet takes all the classical elements of traditional heavy metal without being afraid of adding its own flavor to the recipe. Already in the early stages of their career, BATTLE BEAST were to be noticed quickly by the international metal scene, especially after winning 2008’s Wacken:Open:Air “Metal Battle” and Finland’s “Radio Rock Starba” competition as well as after performing at the Finnish Metal Expo.

Fueled by its ever-growing fame, the combo soon caught the attention of Nuclear Blast which resulted in a record deal and the worldwide release of the highly acclaimed debut album “Steel” in January of 2012. Subsequently, BATTLE BEAST continued their triumphal march by touring together with NIGHTWISH for a total of 21 shows all across Europe, persistently extending their fan base through their tremendous on-stage energy and joy of playing. When former lead singer Nitte Valo quit the band in September 2012, BATTLE BEAST immediately got the chance to showcase new vocalist Noora Louhimo’s amazing skills live on tour with SONATA ARCTICA – over the course of 22 shows in 11 different countries, the renewed line-up proved that it was as strong, wild and hungry as ever!

After busy months of recording, producing and mixing in JKB Studios Helsinki (all of this done by the band members themselves) BATTLE BEAST’s eponymous sophomore release “Battle Beast” will strike the scene like a lightning on May 17, 2013, consisting of the Finns’ trademark mixture of extremely catchy choruses, epic heavy metal anthems, heavenly vocals and solos to die for - brought to a new level of intensity and sound quality. With new astonishing lead vocalist Noora on board and a record in their hands that literally is strong as “steel“, BATTLE BEAST are facing a future brighter than a thousand suns. Beware: The Beasts are back!!!