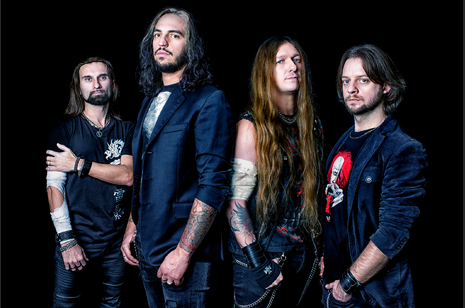 Widely recognized as a ground-breaking live band, Arthemis’ career is marked by several amazing shows full of energy and true passion. The band performed at some of the biggest Metal festivals in the world (Download Festival, Hellfest Open Air, Wacken Open Air, Bloodstock Open Air, Gods Of Metal, Hard Rock Hell, Hammerfest and many more) and toured relentlessly since day one, eventually becoming the ultimate road-warriors. They have also delivered 7 full-length killer studio albums plus the astonishing "Live From Hell – Live In The UK".

Their brand new album "Blood-Fury-Domination" is released from Scarlet Records on 7th April worldwide (except from UFR Records in Japan on 12th April.) Massive production, uplifting songs, sing-along choruses and a true wall-of-sound that mixes the deepest roots of Metal with modern influences and hooks. This true piece of art absolutely means “no compromise” and clearly screams “We are Arthemis and we’re gonna get you all”!