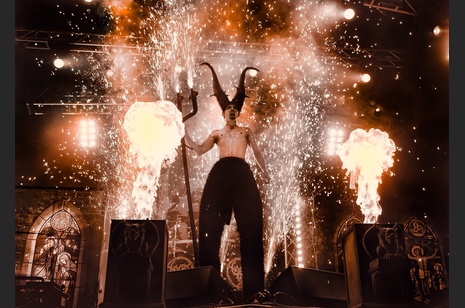 Cited as a huge indirect influence, and as one of the true founding fathers of occult metal, the band formed in 1982 from the carcasses of UK metal bands RACE AGAINST TIME and PARALEX, whose ‘White Lightning’ EP was listed by Metallica as a favourite, and which was subsequently included on the Lars Ulrich, Geoff Barton ‘NWOBHM ’79 Revisited’ sampler album.

Despite over five years of constant touring, the band were cruelly overlooked by the ’80’s music press, who just didn’t get it. HELL were too different, too extreme, too musically intelligent and far too thought-provoking for all but the most enlightened to understand them. The final crushing blow came when their long-awaited 1986 album deal with Mausoleum collapsed as the label went bankrupt, followed by the tragic suicide of singer/guitarist, Dave Halliday in 1987. The remaining members drew a line in the sand and stopped playing overnight.

A teenage Andy Sneap was a permanent fixture on the front row of almost every show HELL played and was also taught to play guitar by Halliday. He then went on to form Sabbat and become a renowned metal producer. Upon meeting again, the remaining members of HELL – Kev Bower (guitar/keys), Tony Speakman (bass) and Tim Bowler (drums) talked with Andy about re-recording the old material to release in conjunction with the old demos. With Sneap replacing Halliday on guitar and David Bower on vocals, the band has recorded 10 HELL classics from the 80’s.

One hugely respected European journal has already described ‘Human Remains’ as one of the best things they have heard in the last 15 years and THE band to watch out for in 2011.