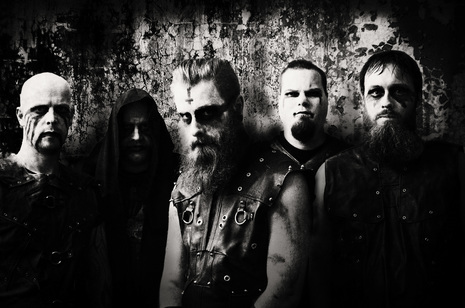 Decrepit Monolith emerged from the cold north of England in 2013, a gathering of musicians who all wanted to craft music with a blackened edge accompanied with a brutal live show. After starting out as a five piece the group soon reduced to four members and after writing a small selection of tracks hit the stage with a debut performance supporting the NWOBHM band Blitzkrieg. Leather body armour, giant crucifixes, chains and blood were part of the live set from the beginning and the show continues to grow. The initial EP Godless Sanctum was released in 2014 which showcased the slightly different style from the normal interpretation of black metal, a mix of genres including thrash and death are all mixed in to the Monolith sound. In 2014 with a full European tour booked the Vocalist/Guitarist left the band and with no alternative the tour was cancelled and the band set about finding a replacement. In the time that passed new tracks were written in preparation and countless potential replacements tried out to no avail.

It was not until 2016 that new vocalist Odious was found and became an instant fit, Thanatos who had rehearsed with the band during the search returned as a permanent member to fill in the guitarist slot taking the horde back to five members. The band turned to the studio to record the new single 'Decrepit Monolith', a self-titled track that captures the re-birth of the band and baptism of the new members. A feature video was shot to accompany the new release which was released May 27th 2016.  Reborn from the darkness Decrepit Monolith once more began taking to the stage to unleash their live ritual.
It is a great honour for us to be selected to play at Bloodstock, we look forward to descending upon the new blood stage with our live ritual and mix of blackened death, following in the footsteps of those that have gone before us. There will be blood..