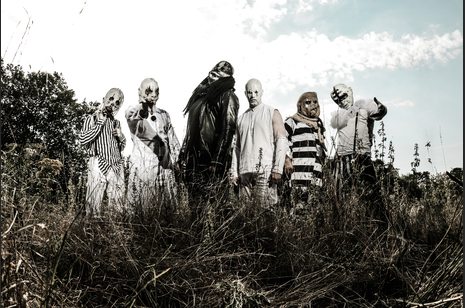 How The Injester - an anonymous clown horde was born is a story the band will tell…..
The influence of the likes of Rob Zombie, Alice Cooper, FNM and Mr Bungle have played a part in shaping who they are.

Under their previous personas, The Injester have played some of metal’s biggest stages. Performing at Bloodstock, Download, Hellfest, Wacken, Hammerfest, Hard Rock Hell and many other festivals and tours. This moulded them into what they have become….

The band’s music is a metallic mix of horror, theatre and tales for all mankind.

On Halloween of 2019 the band released their debut music in 'Introducing The Injester' and their debut videos for 'Apophenia' and ‘Knifeblower’ to all major platforms.
The Injester are now stepping out of the shadows, masked and armed with explosive new material bringing their musical nightmare to life.

THE INJESTER
Ashe – Vocals
Gaspard – Guitar/Backing Vocals
Skinface – Guitar
Old Sparky – Bass
Yorick – Keys/Samples
Morax – Drums
'We can already hear the clown horde cackling into the sky above Catton Park at the prospect of turning the new blood stage into our own Bloodstock Big Top! We're delighted, see you there....' The Injester