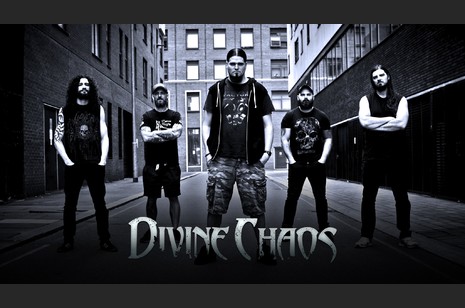 From the depths of the British Metal underground to stages all round Europe, treading boards with some of the top names in the metal community, Divine Chaos are here for war.

2020 saw the release of ‘The Way To Oblivion’ to critical acclaim. TWTO refines the sound and standard which audiences have come to expect from the band, but this time around with even more focus, hooks and a back to basics approach. TWTO is the first album to feature vocalist Jut Tabor, whose vocal style brings a whole new dimension to the band’s sound.

Divine Chaos’ aim has always been to deliver cutting edge metal, a sound that is as modern as it is old school. A refined blend of influences and an authentic aggression that allowed the metal genre to thrive in its early heyday. Divine Chaos explore the darker side of thrash metal akin to the early 90’s sound, with technical and progressive execution.
Bloodstock is sewn into the very fabric of Divine Chaos. Having had the pleasure of playing both the Sophie Lancaster and New Blood Stages, not to mention countless messy weekends as attendees, we are beyond delighted to have the opportunity to play on the Ronnie James Dio stage, long considered the holy grail of UK underground metal. We're eternally grateful for the faith that the Bloodstock crew has put into this band over the years, and can't wait to showcase The Way to Oblivion on the greatest of stages. This is the biggest show of our careers, and rest assured that Divine Chaos is bringing the thunder. Bloodstock Open Air, you are getting it!