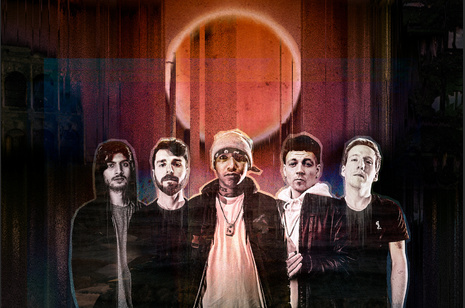 Hacktivist began in 2011 when former guitarist Timfy James left his previous band 'Heart of a Coward'. James claims that the formation of Hacktivist was a "fluke", with no intention of developing such a style, but the group was born when peer J Hurley, a local rapper with little history in the metal scene, began recording vocals over some of James' demos. After the demos became very popular online, James decided to recruit a full line-up, bringing in Richard Hawking on drums, Josh Gurner (ex-Sacred Mother Tongue) on bass and Ben Marvin (James's former bandmate in Heart of a Coward) as a second vocalist. The band began work on an EP in 2012 and debut single "Unlike Us" reached No. 2 in the Amazon UK metal chart within 48 hours. Despite being released independently on 12 November 2012, the band's self-titled EP proved popular in the metal media with Metal Hammer in particular giving the band significant coverage and considerable airplay on BBC Radio 1.

After the release of the Hacktivist EP, the band set out to tour. This included supporting slots for acts such as Enter Shikari and Korn and performances in European festivals such as Sonisphere Festival, Download Festival and Rock am Ring and Rock I’m Park in summer 2013. In April 2013 the group released a new song "Elevate", with an accompanying video, for free download and this was followed up in August with a cover of "Niggas In Paris" (originally by Jay-Z and Kanye West). A video for "Niggas In Paris" was filmed during their set at Download Festival 2013. They also performed a live session for BBC Radio 1 at Maida Vale Studios.

The band headed out on a UK headline tour throughout winter 2013, supported by The Algorithm. A re-release of their debut EP with 4 bonus tracks was released on 11 November 2013.

The band has shown support for hacktivism collective Anonymous, and appear to support "whistle-blowers" Edward Snowden and Chelsea Manning whom they reference in the song 'Cold Shoulders'.

On 4 August 2014 Hacktivist released the single and video for "False Idols". Many references to activism (especially hacktivist collective Anonymous) are made throughout the video and within hours the song had reached number 1 on the iTunes Metal chart. This release was followed on 12 November by "Deceive and Defy" (also accompanied by a video), featuring Charlie Holmes of Heart in Hand on vocals. Hacktivist then toured the UK from November to December, supported by Dead Harts and the One Hundred.

Following the release of the single "Buszy" on 17 January 2016, their debut studio album Outside the Box was released on 4 March 2016.

On the 20 January 2017, it was announced that Hacktivist and Ben Marvin were parting ways due to Ben's family commitments,[6] and rapper/vocalist Jot Maxi was brought in as the new co-vocalist.

May 31, 2017 saw the release of single '2 Rotten' with an accompanying video. The track was essentially a heavier remix of track 'Rotten' from Outside the Box but with Jot Maxi taking a leading role as opposed to the 16-bar feature slot he had in the original. The single was well received despite the video not achieving as many YouTube views as previous releases, with the general census across social media being that Jot is a welcome addition to the band and that a 2nd album is eagerly anticipated by fans.
On the 28th of March 2018 it was announced that Hacktivist and Timfy James had parted ways. Following on from this the band recruited James Hewitt (of bands 'Invocation' and 'Exist Immortal') as their new guitarist and producer with an official announcement made on the 19 January 2019. Hewitt had been playing live and writing new material with the band since June 2018. As a result, Josh Gurner would provide clean vocals following Timfy James' departure.

The band embarked on a headline UK tour in Jan/Feb 2019 and went on to release the single 'Reprogram' with accompanying video on the 10th of April 2019.