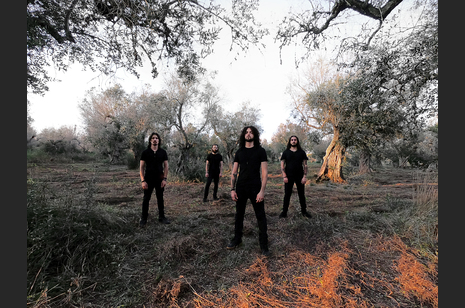 Slave Steel are a metal band based in London. Rooted in thrash, death and heavy metal influences, their sound is characterised by hammering rhythm section, groovy guitars and acid vocals. Soaring sonic battery, poignant lyrics, give an honest depiction of their core values and social commentary - for these reasons, Slave Steel elevates metal music and takes it to another level of artistry.

The project started in Rome in 2008: over 10 years later, it has evolved becoming the sonic squad that is today. In 2015 Slave Steel self-released their debut album Entanglement (Outer Sound Studios, Rome). They performed at the Metal 2 The Masses London and reached the Grand Finals, achieving the Sponsor Award by Very Metal Art. Their win involved publishing the Lyric Video Fat Sunday’s Tale. In 2017 they released the new self-named EP for a re-mastered version of the single True Sight (Finnvox Studios, Helsinki).

Their latest singles and official Videoclips Ogre Cage, Shut, Blessed Is The Mess and Dream of Decadence in collaboration with University of the Arts London and Very Metal Art, recorded & mixed at Rogue Studios (London) and mastered at Fascination Street Studios (Stockholm) are reaching thousands of views on YouTube and are available worldwide. The full EP and the fifth music video are set to be released in late 2021.
With plenty of explosive material just released, SlaveSteel are absolutely electrified to step on the New blood stage this year. Fasten your seatbelts Bloodstockers!