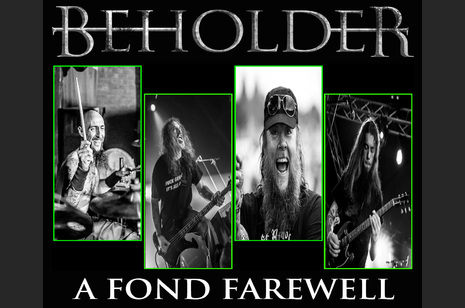 It’s been 4 years since last orders for British progressive metaller's Beholder, yet they’re back one last time to celebrate 3 albums, countless tours and a run of 18+  years of trials, tribulations yet all out good times.  With the show taking in tracks from ‘The Awakening’ (2009), ‘The Order of Chaos’ (2013) and ‘Reflections’ (2016) this show promises to offer up the sense of positivity much needed right now and deliver it in that typical Beholder style.

The bands relationship with Bloodstock started back in 2007 when the, then covers band, took to the ‘Lava Stage’ and proceeded to make a raft of new friends, entertain the masses and literally blow the fuses on both lights and audio (fact).  This in turn resulted in a frank, yet drunken conversation where frontman Simon Hall was drafted in to run production … a conversation he still struggles to re call, yet has resulted in him being part of the festivals inner circle ever since.

The connection grew ever stronger when they released the ‘Never Take Us Down’ charity single, taken from their first ever EP ‘Unleash the Hell’ which was an outcry over the brutal murder of Sophie Lancaster.  Shortly after, the opportunity came about for the festival to rename the 2nd stage and Sophie’s name, along with recognition of the organisation reaching out to help those affected by hate crimes, it became a fundamental part of the festivals offering.  Further to that the song was used in campaigns that were presented in schools Nationwide, along with being played in the European Union highlighting the need for change.

2009 and Beholder offer up their first full release ‘The Awakening’ and again the connection with Bloodstock was there for all to see as the artwork was commissioned by none other than Paul Raymond Gregory, artist extraordinaire and founder of the festival. Not only that but it was met with an abundance of media high praise with Metal Hammer suggesting they were the “Standard bearers of Britain’s Traditional Metal Renaissance” and even Bruce Dickinson suggesting they were “Fine chunky stuff and well worth checking out” …. Needless to say egos were pampered and they dined out on that for a couple weeks.

On the back of this, Beholder toured every UK venue, dive, hovel and even forcing their way into a garden party to get their name out and in many ways the hard work paid off as they secured slots with Saxon, Anvil, Lawnmower Deth and many others … the name was starting to get out there.

However it took till 2013 before Beholder would release their 2nd album and by this time members had fallen away and line-up changes had meant Beholder were a different kind of creature and the release ‘The Order of Chaos’ reflected a more sombre, angry outfit disillusioned with modern society and this certainly came out in the songs.  With publications such as Terrorizer recognising they were offering up “a malicious cut of modern British thrash”, the band pushed on with relentless touring both in the UK and abroad, taking in festivals both home and overseas.

2016 and Beholder were down to 4 as Scott Taylor, Chris Bentley and both Simon Fielding and Hall, embarked on what was to be their final release.. “Reflections”
In previous releases Beholder had not held back from the fact they were disillusioned with the direction the world seems to be heading and this shaped the anger and frustration to their work, and although this remains, 'Reflections' is far more optimistic in its approach and has been interlaced with soaring melodies and uplifting chorus hooks to create something very special.

Reflections met with high praise from fans and press alike, with Metal Hammer Magazine claiming the album to be "excellently crafted and crushingly performed...this is without a doubt the most cohesive collection of songs that Beholder have put to their name to so far" and Kerrang! Magazine boldly stating that "Beholder meld the labyrinthine and the massive to imposing effect...it all hangs together with bloody minded, ass-kicking panache"

Recorded in the UK, mixed in Norway and mastered in London, ‘Reflections’ resulted in a short run of shows with Onslaught, an album specific performance at Bloodstock in 2016 and yet in April 2017 frontman Simon Hall called it a day due to personal issues …… it all just felt like unfinished business.

So in August of this year Beholder’s slot at Bloodstock Festival promises to put closure to a great run and in doing so offer up both positivity and togetherness that the metal community so fervently needs in this post pandemic scenario.