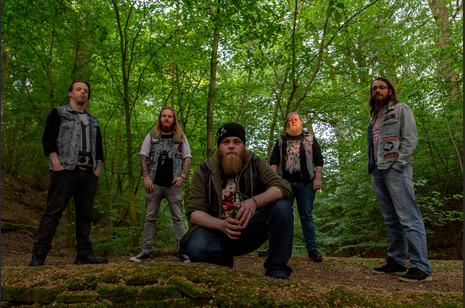 Entering the live music scene in April 2018, Son Of Boar quickly began to earn their place on stages across the country with a blend of heavy, groovy riffs, roaring vocals and head-banging rhythms.

Less a super group and more a Frankenstein’s monster stitched together from musicians of various local acts, the band gathered in darkened rehearsal rooms to create an equally mixed up sound; bringing together a mix of 70’s rock, Doom, and modern Stoner—Sludge into one sonic brew.

After giving the songs time to ferment the band hit the road, squeezing in as many gigs as they could over their first two years. 2020 was launched with the Siege Of Albion tour and was set to be followed up with multiple festival shows, unfortunately all scuppered by COVID.

Having hit the studio in early 2020 the band have now teamed up with Stoned Rocka Recordings, part of the Off Yer Rocka family, to release their debut album featuring 5 tracks of heavy riffs and deep grooves designed to get heads banging, beers swilled, and Tusks Up!

Press quotes:
“SON OF BOAR strike a fatal wound with their ‘A Tongueless Tale’ EP, much like some of the characters within the folktale associated with the band’s home place, “The Legend Of The Bradford Boar“ “ - Pat ‘Riot’ Whitaker, Riff Relevant

“The debut EP, A Tongueless Tale by Son of Boar is everything you could want from a sludge and doom band. Glaring elements of stoner rock singe the edges of their gruff sound. “ - @midnightmusicreviews

“And there you have it: five songs, one debut album. A fine band; they’re awesome live, have the best t-shirt designs I’ve seen in donkeys and are creating a real sense of cult-like, underground authenticity that is addictive. If I could afford to buy a copy of this album for everyone reading this review, I would. Even that weirdo at the back.” – Ever Metal

"Playing Bloodstock is something we put on our wishlist of what we might get to do "Some day". Turns out "some day" is much closer than we thought and we're blown away to be asked to feature on the Newblood stage. A lot of great bands have been on there and we can't wait to get in front of that festival crowd and make some noise! Tusks Up!"