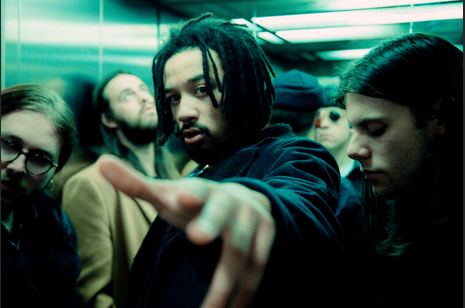 Loathe’s latest records The Things They Believe and I Let It In and It Took Everything are out now via SharpTone Records.
Loathe have been making waves in the British underground heavy music scene since their formation in 2014. Debut album 2017’s The Cold Sun put them on the map, landing them nominations for Best New Band at the Metal Hammer Golden Gods and Best UK Breakthrough Band at the Heavy Music Awards. Their intense, visceral multi-media live show marked them out early as a band with broad ambitions. Their second full-length album, 2020's I Let It In and It Took Everything, followed by 2021's The Things They Believe, have continued to propel the band forward – their gutsy ambitions beginning to be realised.
Rather than existing within one style or taking one approach, Loathe pepper their music with a range of influences and musical motifs that move fluidly. Both Radiohead and The 1975 are cornerstones in the approach they take with their music, partly in a sonic sense, but also in terms of being a band who strive to do whatever they want, cultivating a fan base that will follow them down some deep, experimental rabbit holes. That sense of distressing, Lynchian esotericism is the territory Loathe are intent on occupying, a world where nothing is quite as it seems, curiosity is rewarded, and nothing is laid out in black and white.
The Cold Sun was a heady hybrid of meaty down-tuned riffs, lacerating screams and pile-driving rhythms. I Let It In and It Took Everything retained all of those elements, albeit delivered with a searing potency and sharpened focus that bettered its predecessor in almost every conceivable way. The record widened their palette significantly and surprises were plentiful; shimmering guitars, layered synths, unhinged guitar effects, a stronger emphasis on ethereal clean vocals and even elements that echo the sheer sonic brutality that epitomises black metal.

Loathe's latest record The Things They Believe was surprise dropped in February 2021; an audacious ambient soundtrack album created to accompany a limited edition photobook by Mark Unthank. These new projects were given impetus by the incredible response to I Let It In And It Took Everything. The Things They Believe extends the complex identity and timeline of I Let It In, via sonic landscapes and parallels that explore and expand the record further.
Loathe will be touring the UK in September 2021 as support to While She Sleeps, with performances also set for
Download Festival 2022 and UK Tech Fest 2022.
2018 and 2019 saw Loathe perform at Download Festival, Slam Dunk, 2000Trees and UK Tech Fest. The latter part of 2018 saw the band perform as special guests to Beartooth in the EU, plus Of Mice & Men, and Sikth in the UK. 2019 saw Loathe play across the UK and EU with acts such as Architects, Stray From The Path, While She Sleeps, Rolo Tommasi, The Devil Wears Prada and Hollywood Undead, as well as their first foray into Asia, where they joined Crystal Lake for shows in Japan and China alongside some solo, headline dates. Their first full US tour took place in 2017 with Wage War and Oceans Ate Alaska, following on from their debut US performance at the highly respected Knot Fest. Early 2020 saw Loathe conquer a lengthy headline UK run, with many dates selling out including London’s Omeara venue.