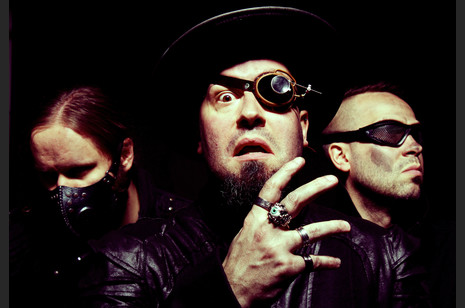 Hatched in a cold laboratory located outside the streams of time, spawned in the dark sewers of Victorian London...the myths surrounding the origins of Spectral Darkwave are many; but be they travellers in space and time, mad men or simply dreamers, the power and potency of their music is undeniable. Fusing the intimidating splendour of symphonic death metal and the sombre majesty of doom, adding a touch of black metal’s bleak fire and an infusion of industrial terror, then entwining the resulting weapon of war in silver threads of horror and adventure, myth, story and magic – Spectral Darkwave are a band like no other.
The first release from the visionary trio came in 2015 in the form of debut album First Last Contact on the band’s own Occidental Records label. This collection of incredible songs was far from the first faltering steps of a band searching for an identity; Spectral Darkwave seemed to emerge from the void a fully formed entity with breathtaking power already at their fingertips. Zero Tolerance Magazine were transported to “the freezing reaches of outer space” and the “shadowed depths of the ocean floor” by this new voice in metal, awarding it a prestigious 5/6 review and declaring...
“The mechanistic collides with the melancholy; alien technology with ancient magic and the results are refreshing and captivating... Fine dark metal that suggests a wealth of possibilities still yet to be explored.”

On the stage Spectral Darkwave bring their visions of the outer limits to spectacular life, enhancing the power of their instruments and the voice of The Arch-Kakoph with a diabolical machine of their own creation, The Slavedriver. The environs of the concert hall dissolve and the gathered audience find themselves surfing a wave of adrenaline into the world of Spectral Darkwave, a boundless universe of wild exploits and unimaginable adversaries from beyond the brink of sanity. Triumphant performances at the renowned Metal To The Masses events and fearsome headline shows supported by the likes of Concrete Age and Deep Throat Trauma will not soon be forgotten by those in attendance.

Over the course of 2019 the band released two superb singles, The Price Of Victory and A Toll Is Due, leaving fans restless and hungry for a second full length album. The wait is now almost over...

Having forged a new alliance with Imperative PR Spectral Darkwave are now ready to announce that Autumn 2021 will see the release of the follow up to First Last Contact. Those past glories are soon to become but faded memories as the next chapter in this epic tale is unveiled. Strap yourselves in, because the countdown to launch is about to begin... “...really something special.”  – METALUNDERGROUND.AT Genre: Dark Industrial Death/Doom Metal
For fans of: Triptykon | Septic Flesh | Abyssic | The Vision Bleak

Line-up:
The Arch-Kakoph - Vocals/Guitar
The Gunner - Bass
The Engineer - Drums