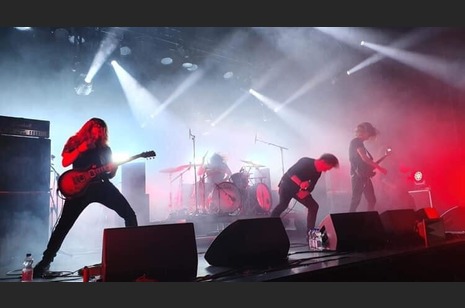 Canterbury, England - a picturesque, medieval city, that birthed the legendary prog 'Canterbury Scene' of the 1960's and 70's; boasting such artists as Caravan, Soft Machine, Steve Hillage and now - Famyne.

Famyne have been on the UK circuit since 2014, self releasing an EP, debut album, and now, having signed to Svart Records, they've an upcoming second album, due in Autumn. Though heavily influenced by the likes of Sabbath, Alice In Chains, Opeth and The Cure, Famyne have created a sound all of their own; taking listeners on a journey through psychedelic realms, pummeling riffs, and a relentless, doom-driven rhythm section.

Having won Kent's MT2M in 2016, Famyne performed on BOA's New Blood stage that same year, and have been aggressively touring Europe. Their last tour took them to the shores of France, Spain, Italy, Switzerland, Slovenia, Slovakia, Austria, Hungary, Romania, Poland, Germany, The Netherlands and Belgium, before a final, homecoming show in the UK.

Now, with a full-length release on its way, their most stable, dedicated line-up since formation, and a strong desire to get back on the road, Famyne is an act not to be missed this BOA 2021
"Bloodstock has been a home away from home for many of us in this band for years, so to be coming back to play after the Covid-19 pandemic is going to be incredible. In 2016 we were lucky enough to win the Kent M2TM and now with our second release coming out via Svart Records in the autumn, this couldn't have come at a better time.
We can't wait to show all our friends/fans what we've been working on!"