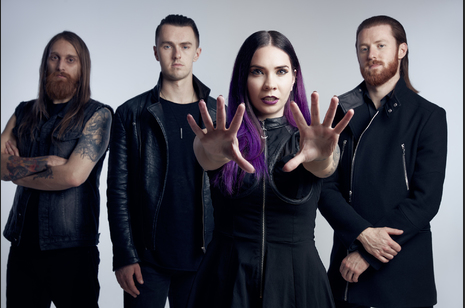 Just as Skarlett Riot entered the studio to begin working on their third album, a global pandemic struck and the band found themselves kicked out of the studio and into isolation. Not that this was to deter the acclaimed UK quartet. The band kept working on ideas and as soon as lockdown eased, they returned to the studio and began work on what critics are calling their best album to date. Skarlett Riot are no strangers to great reviews and fantastic support from the press but with ‘Invicta’ the band knew they were onto something special.

It’s harder, faster, and more focussed than before, with growled vocals adding another dimension to their album signature sound. It’s clear from listening to ‘Invicta’ that every member of the four-piece have upped their game: Dan’s guitar bite like never before, Tim brings a undeniable power to proceedings alongside Luke’s exceptional drumming and Skarlett’s vocals are as remarkable as ever, and her new found guttural roar adds a dark and unexpected side to her performance.

With ‘Invicta’ Skarlett Riot wanted to make a statement of intent, that, despite the pandemic, despite the lockdowns, nothing would stop this talented making their voice heard. And you can hear that in ‘Invicta’ loud and clear.