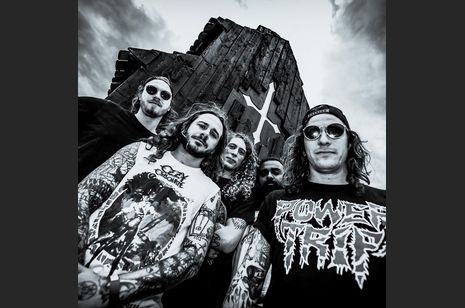 BAEST come from Aarhus in Denmark and have successfully established themselves as one of the country’s most promising metal acts in recent years! They have won two Gaffa awards in 2019 (for best metal album and best newcomer) and have been followed by Danish National TV-channel DR on their European tour with Decapitated for a documentary series called ‘Den Satans Familie’, which aired in June 2019 (https://bit.ly/EnSatansFamilie – in Danish only).

Furthermore, they have made it to a morning show (‘Go Morgen Danmark’) and prime time evening program (‘Aftenshowet’). They have played at festivals such as Summer Breeze, Ruhrpott Metal Meeting, Copenhell, Roskilde, Royal Metal Fest, Eurosonic and supported bands like Abbath, Hatebreed, Dying Fetus, Entombed A.D., and Decapitated.

BAEST achieved all this by just playing, performing, writing, touring, working in the name of death metal, impressing audiences with their furious sound and captivating, energetic onstage presence, and unleashing savage waves of HM2 pedal driven riffs. Now, it is time for chapter two of this incredible journey that started back in 2015.

“In Denmark BAEST has become the number 1 death metal band,” the band proudly reveals. “We are currently at the brink of stepping into new territory that no Danish death metal band has ever done before even though with Undergang, Phrenelith, Slaegt, there’s no shortage of great bands over here. Still, we have brought our music to the major radio stations and TV-channels and we experience fans supporting us, who have never before attended metal shows.”

Recorded at FinlandStudio, mixed and mastered by Andreas Linnemann at Hop House Studio, “Venenum”, sees the band’s strong Swedish death metal influences evolve towards a more diverse approach, further embracing elements reminiscent of Morbid Angel, Death and Bolt Thrower, and mounting in a whole batch of crushing anthems. “It is is a continuation of “Danse Macabre”, where the listener is dragged through our personal hell, conceptually build around ‘The Divine Comedy’ by Dante,” BAEST explain the approach to album number two. “The songs describe each their own circle of hell, which means they all have a different atmosphere and idea to them. We especially like the track ‘As Above So Below’, a tribute to the late Chuck Schuldiner, combining his melodic style with our own brutal ferocity.” Another highlight is the first track released from “Venenum”, the slow monument entitled ‘Gula’, seeing the group explore “the heavier side and sound of BAEST. We ended up with a raw, simple, yet grinding track that emphasizes the foundation of BAEST: melody and groove mixed with chaos.” As a special treat for its earliest fans, BAEST also remixed and remastered their ‘No Guts, No Glory’ cover, which will be released digitally and as bonus track: “This was recorded in 2017, but fans kept asking us for it to be released. Bolt Thrower are strong conceptually, and stand out with their uncompromisingly heavy and catchy writing style - this is our homage to the greats!”

Just released a year after its well-received predecessor, “Venenum” proves that BAEST have grown stronger, more experienced, more passionate and determined whilst touring and promoting their debut album “Danse Macabre”. The real fun is just about begin!

The new opus will be released September 13th on Century Media Records, and will be presented live on tour throughout Europe with BAEST being special guests to Aborted and Entombed A.D.! A fantastic opportunity for this aspiring quintet: “With our fan base steadily growing, the goal for ‘19 is to build on this momentum and reach new territories. This month-long tour will be a great chance to ensure that everyone has a chance to experience how we bring hell to the stages we visit!”