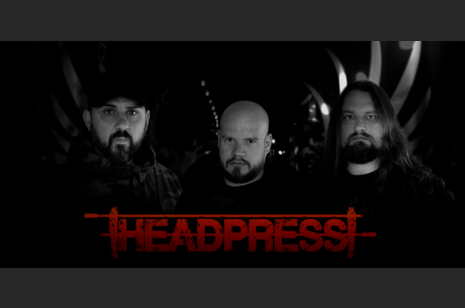 ".....there are three words that consistently crop up; heavy as f**k." (Distorted Sound Mag)

Headpress is an extreme metal band from Stoke-on-Trent. Founded by bassist/vocalist Karl Lawton and guitarist/vocalist Martin Allen; with Tim Paling joining on the drums cementing the three-piece, Tim picking up the additional vocals, which are signature in the bands brutal three-point vocal attack style.

Crushing guitars, pummelling bass, and thundering drums create "a gigantic wall of sound capable of smashing through the thickest of barriers" (Moshville Times) whilst retaining relentless groove, clarity and focus.

Carving their way through the underground metal scene, supporting heavy hitters such as Soulfly, American Head Charge, and Devilment, tours throughout Europe, and appearances at HRH Metal featuring Decapitated and Raging Speedhorn, they honed their hardcore-influenced brutal style of metal

Having gained underground success on the back of 3 EP's, the band are currently putting the final touches together on a forthcoming release, recorded with Sam Bloor at Lower Lane Studios.
“Bloodstock feels like a 2nd home to us. Having watched hundreds of bands grace the stages across the years, we feel honoured to now be a part of the best UK festival, bar none”