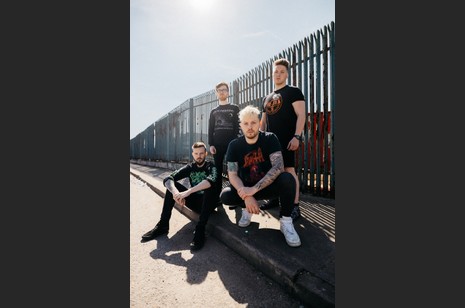 Must Kill was officially formed by Dan Pool in early 2018 with Daryl Cooper and James Bell. The guys knew each other from playing in various bands over the years. The whole concept and approach to the music of this band is to try and make each song sound unique whilst sticking to their core values and love of old school Thrash and Death metal. Later in 2018 the band recruited John Otter on bass and wrote four songs with the intention of recording their first EP. The band went into the Studio in mid-2019 to record their debut EP entitled “Ghost Malevolent” with producer Ed Sokolowksi. After the recording, the band played a few shows and released their Debut EP in March 2020.

As soon as their EP was released we faced a global pandemic which meant that the band were not able to play any shows to promote their release or write any new songs together. The EP was well received globally. A review from ScreamBlastRepeat.com gave the EP a rating of 9/10 and quoted: “There is no doubt Ghost Malevolent is a beast of a record. It may only be a four-track EP, but these guys sound like they’ve isolated themselves in a rehearsal studio for five years and emerged as the UK’s tightest outfit.” The band were pleasantly surprised to see a high demand of merchandise sales from countries such as the US, Japan, Malaysia, Scandinavia and other EU countries. Even in the digital age and a pandemic, people were still buying CDs and T-shirts.

In 2021 John Otter decided to leave the band due to personal commitments. In December 2021 Must Kill recruited a new Bass player called Alex Reeder. He is a classically trained guitarist and has taken the band to another level with his musical ability. The band are about to record their follow up EP later this year and plan to play as many shows in as many different places as possible to promote the release. During this time the band will continue to write more material with the intention of recording their first full length in the near future. Must Kill have every intention of pushing themselves to become a serious name in the metal world, with a lot of hard work and dedication the band are excited about what the future holds for them.

We are beyond excited for the opportunity to play Bloodstock this year! Some of us have been attending Bloodstock for over 10 years and it has always been a dream of ours to play this festival. This will be a great chance to get our name out to a bigger audience, we cannot wait to hit the stage!