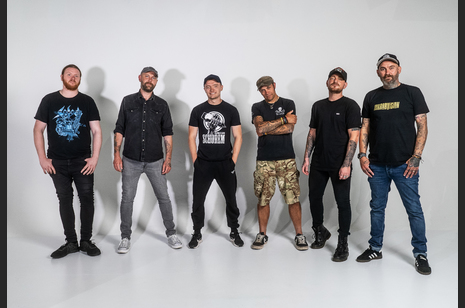 Ferocious Dog are a six-piece band, who deal in a vibrant vein of Celtic-folk infused punk rock, comfortably slotting in between Billy Bragg and The Levellers. However, like The Levellers and New Model Army (also listed as an influence), Ferocious Dog have a broad spectrum of influences, tied together by the band’s left-leaning convictions and a shared desire to communicate through music.

The band has headlined tours of the UK and Europe, performed in Kenia and Dubai, festivals such as Bearded Theory, Alchemy, Deerstock, Farmer Phil's Festival, Splendour, Lowlands (Netherlands), Glastonbury Festival and Beautiful Days.

Pivotal to the ethos and drive of Ferocious Dog is the sad fate of Ken's son and Dan’s brother Lee. Lee served in Afghanistan from the age of 18, and upon rejoining civilian life took his own life in 2012 at the age of just 24, unable to overcome the post traumatic stress disorder he was suffering from. Lee is commemorated in the songs "The Glass, Lee's Tune" and "A Verse for Lee" on their first album. This gave rise to The Lee Bonsall Memorial Fund which is a constant focus for fundraising and awareness building by the band.

The band released a number of EPs before a first album “Ferocious Dog” on Weird Sounds in 2013, described by Louder Than War as "startlingly good, and so it should be, it’s been many years in the making". The album has been reviewed positively in both folk and metal sources.

On 11 February 2015, Ferocious Dog announced that they would be releasing a second album named “From Without”

Touring the new material started at The Bodega in Nottingham on 7 March 2015, the first live appearance sold out in 22 minutes. This kicked off a busy year of touring and festivals, culminating in a sell-out home town gig at Rock City in Nottingham. Ferocious Dog are the first independent act to sell-out the venue in its 35-year history. The band encouraged those attending to bring items for a local food bank to the gig, this is still going on.
Red Album “2017” is record that starts hard and finishes hard. Along the way there are stories of the dark chapters of our past as well as the twisted times we live in now and all of it is set to a wonderful soundtrack full of intense moments. Beautiful violin, deep lyrics, and surprising arrangements lead the listener on a politically charged musical journey.

Fake News and Propaganda “2019” stays true to the sound of Ferocious Dog; Bonsall’s attitude along with the intricate dynamic fiddle work of Dan Booth and the ravaging tones of an electric guitar complete the recipe of this folk-meet-punk genre.

With the new album 2021 “The Hope” they have stepped right out of there shadow, and what screams at you is a band hitting their stride. First single from the LP “Pentrich Rising” hammers home how powerful a live standard this is going to be. “Broken Soldier”, hits you full in the face, lyrically superb, with The Taliban introduction sample as apt for present times as anything you’ve ever heard, coupled with the damage done within modern warfare.  An accompanying video, directed by Justin Griffiths, won the European Film Festival’s Jury Diamond Award for short  best music video for August 2021.

Ferocious Dog is a band that are confident, not to these ears drawing comparisons to The Levellers or New Model Army anymore, this is one dog that is really starting to bare its teeth, a band for now as the music scene begins to re-awaken.

The single “The Hope” is a story about hope. It’s a message to show that even though things can seem as dark as can be, there’s always light at the end of the tunnel.