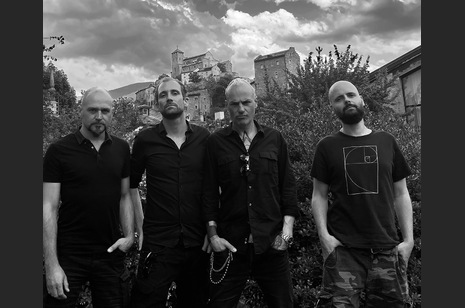 S A M A E L resurrected black metal in the early 1990s with the landmark debut «Worship Him», introduced symphonic black metal in 1994 with the classic «Ceremony of Opposites» and  pioneered industrial metal with «Passage» in 1996.

The Story :
S A M A E L awakened on the 14th of July 1988 when brothers Xytraguptor and Vorphalack loaded
their musical gear into an atomic bunker.

Rehearsing seven days a week, they soon recorded a couple of tracks and released their selffinanced 7'' «Medieval Prophecy» which infiltrated the underground scene through mail and small  independant distributors.

Two years later, the duet moved to Geneva to record what would become S A M A E L's first album.

Facing refusal from the established recordindustry, the brothers finally inked a deal with the freshly  started label Osmose Production, which released «Worship Him» in April 1991. With the addition  of Masmiseîm on bass, the band played shows in France, Germany, Holland, Poland, Russia and  Switzerland before heading back to studio to record «Blood Ritual» . Their second album became the first collaboration with Waldemar Sorychta and their first release on the German ever-growing
inprint Century Media.

«Ceremony Of Opposites» was released in February 1994. That album saw S A M A E L taking a  turn in their approach of composition and sharing of duties. Xy got in charge of all the music while Vorph focused on the lyrical content. In order to perfom that new material on stage, the band  recruited local goth legend Rodolph H to play the keyboards and be part of the line up for two  consecutive years. Three European tours and a first US tour later, the band got back in the studio to
record the mini-album «Rebellion» (1995) before getting back on the road to finish a tour that  ended in Mexico City. This was also the last album with Rudolph as part of the band.

A new sound was slowly taking shape, and the band's line-up saw the addition of a second guitar player. Kaos joined the band and S A M A E L played eight shows in Europe where they performed for the first time live with a drummachine. Two new songs, «Shining Kingdom» and «My Saviour» introduced their upcoming album to the audience. «Passage» was released in August 1996.

After an extensive European headlining tour, the band hit the stage of the most notorious open air festivals of that era : Dynamo, Wacken, With Full Force and many more. Meanwhile, Xy worked on a classical interpretation of the album and released it on his own imprint under the name «Xytra´s
Passage». In June 1998, the «Exodus» mini-album was released, giving the band a bit of time to focus on writing new material.

In Montreux, Switzerland at the world famous Mountain Studios (which today is a Queen museum), S A M A E L recorded and mixed «Eternal» with late rock producer David Richard. That particular album took the band on a long journey. Two European and two US headlining tours with two different line-ups. Kaos left the band, and Makro entered the picture.

The band's performance at Summer Breeze Festival in Germany became the core of the first S A M A E L DVD release, entitled «Black Trip ».Xy and Vorph experiment a bit with electronic music before coming back in full force with «Reign Of Light» (2004). Waldemar Sorychta co-produced the album with Xy, and for the first time the
band used the services of Stefan Glaumann to mix an album. The same team worked on the following record «Solar Soul» (2007), released worlwide through Nuclear Blast Records.

In March 2009, S A M A E L took everyone by suprise with the release of «Above», a side project the band had in their drawers for a decade. Having some time between tours, Xy updated that project and went to Sweden to mix it with renowned metal producer Fredrik Nordström. The result being atypical, but yet challenging, it was decided to release it as the new S A M A E L album and sell it as a tribute to the band's early influences. Not everybody understood the concept and reason within that album, but it nevertheless took the band on an extensive tour through Europe and the Americas, ending with the band's biggest show to date at Rock al Parque in Bogota, Colombia.

«Antigod», later released as single/mini album, and «Soul Invictus», were the first songs to be played live before the release of «Lux Mundi» (2011). The album was onceagain recorded in Switzerland, and was mixed in England by infamous metal guru Russ Russel. The band made a strong statement with this album, by bulding a bridge over the 20+ years of the band´s existence, connecting all the sides, and personalities of the entity known as S A M A E L.

In 2014 Xy took a break from his work with the band and composed a piece of music for the city of Sion. The project known as «Sedunum» was recorded by an orchestra consisting of over 100 musicians, and played for two consecutive years throughout the summer as a light and sound spectacle surrounded by the two castles of Sion. Later that year, the band split with bass player Mas, who was replaced by longtime S A M A E L fan and former Sybreed member Drop. In 2015, the band revisisted their album «Ceremony Of Opposites» and played the entire album live while touring Canada, Poland, Russia and playing some of the biggest European festivals.

In the spring of 2016, the band was back in the studio with Waldemar Sorychta, and in July they mixed their new album in Sweden with Sefan Glaumann. In January 2017, the band inked a worldwide deal with Napalm Records. «Angel Of Wrath» was the first song to be released as a download single in June, and it was followed by «Red Planet» and «Black Supremacy» S A M A E L ´s latest album «Hegemony» was relesed on Friday the 13th of October, 2017.