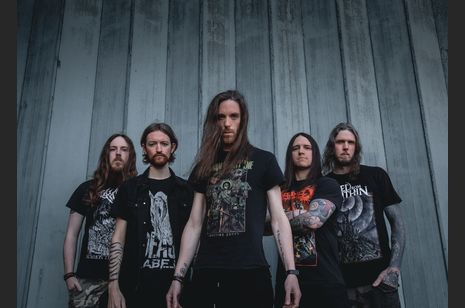 The self-titled EP, Relicta EP and album were mixed and mastered by Death Metal legend Mendel bij de Leij (ex-Aborted) and all received very positive reviews upon release. ‘Connection Lost’ also features guest guitar solos from Phil Demmel (Vio-Lence, ex-Machine Head) and Joey Radziwill (Sacred Reich). Catalysis is now gearing up for the release of ‘Innova’ on July 2nd2022, a new 5 track EP which showcases the band’s sound better than ever before.

The two main things that Catalysis strive for in sound is unrelenting aggression and stomping groove, but this isn’t all that the Catalysis sound is about. With matured song writing, the band have also delved further into its melodic elements with more memorable vocal hooks and more refined guitar solos that highlight the bands melodic development. This new EP from Catalysis has once again been mixed by Mendel bij de Leij.

As well as the bands sonic message, there’s always a deeper meaning in the lyrics of the band's music.  The band often tackle topics that are important to its members and are relevant to current events, with themes surrounding climate change and humans relationship with the natural world, how prevalent xenophobia and racism are in modern society, and the further effects of many governmental decisions around the world.

The lyrics on Relicta and Innova have deviated from this, and instead covers death, loss, issues with one's own mental health, rebirth and personal development.  In 2019, the band also completed their first European tour, including a show at the Aggressive Music Festival in Czech Republic.

It’s needless to say that we in Catalysis are incredibly excited to have been given the opportunity to play Bloodstock Open Air 2022, as winners of the Scottish Metal 2 the Masses Grand Final.

We’re immensely proud to know that we’ll be representing Scotland, it’s music scene and what is on offer north of the border in terms of contemporary metal. We feel that as a band, since our inception in late 2016 we have only gone from strength to strength as we hone our craft and being able to take part in the UK’s largest independent heavy metal festival will only help us to further develop as a band and continue this stride that we’ve created for ourselves. We would like to thank Paul MacMillan at Slow Dragon Music for organising Scotland’s Metal 2 the Masses this year and therefore providing us with this platform, we’d like to thank anyone who came along to any of the shows that we participated in and showed their support, and lastly, we’d like to thank all of the bands that we have played alongside at these shows for always providing us incredible company and wisdom both on and off of the stage.