So what do you do when the apocalypse hits and the coolest metal festival of the year has to take a year out? Do you collapse into a darkened corner, weeping into your Jagermeister? Hell no. You come back twice as hard – and with your help, Bloodstock Open Air 2021 was twice as killer too!
When the virus arrived in early 2020 and that year’s Bloodstock had to be postponed, we were gutted beyond all definition. It was our 20th anniversary, for Satan’s sake, and we had big things planned for you, to say the least. We hung in there as long as we could, while the pandemic raged and other events were cancelled all around us, but in the end we had to bite the bullet.
It was you guys who saved us. You hung on to your tickets and kept the faith while we plunged into the mammoth task of getting an event set up for 2021. With your support, we were able to sit down at Bloodstock HQ, look each other in the eye and say “Fuck this virus. When we come back, we’re coming back bigger and better than ever before.”

First off, we were determined to thank you for rolling over your 2020 tickets by making the ’21 Bloodstock a mammoth, five-day event. We gave you an extra day at no cost, because what is Bloodstock with you, the loyal headbangers who support us every year? Without you lot, we might as well give up and go home. Not long after we announced the expanded event, it became clear that we were going to sell out our 20,000-metalhead capacity.

You knew Bloodstock 2021 was going to be massive. You fucking knew.

The next challenge was to get the coolest metal, hardcore and rock bands on the planet on the bill. They all wanted to come and play, believe us, but international travel restrictions were still strict when we were booking acts throughout spring of 2021, so for some of our friends in Europe and North America, playing here was impossible.

We responded to this situation by booking a predominantly UK line-up, although our Canadian and German Friday and Saturday headline acts – the metal genius Devin Townsend and thrash metal kings Kreator – came over to quarantine first. Yep, we obeyed the rules. No parties in the back garden for us.  Our Sunday headliners, the mighty, mighty Judas Priest, quarantined too. If we were going to do this thing, we were going to do it safely, so no musician or fan would be exposed to the damn virus any more than they absolutely had to be.

So was it all easy from that point on? God no – the challenges were just beginning! Bear in mind that the first lockdown ended on July 19, leaving us just five weeks to get everyone booked in and a million anti-COVID measures put in place to protect the crews, artists and fans. Five weeks? We know musicians who take longer than that to decide which leather pants to put on...

Looking back, none of us really slept during those five weeks. It was a kind of apocalyptic limbo, in retrospect. Who knew if another lockdown would be imposed? Who knew which borders would close – or if planes would still be flying?

But on the morning of August 11, when we opened our gates to see you beautiful people dying to get in and start the party, all our fears disappeared. The sun was shining, the coffee tasted good and pretty soon the music was blasting!
If we tried to list all the bands who blew our minds this year, the internet would break – but let’s start with the premier Brit-thrashers Onslaught, who stepped up to headline the Sophie Lancaster Stage on our brand-new Wednesday night slot. Talk about kicking off BOA 21 fast and heavy, right?
The same applied to Thursday, when the Hobgoblin New Blood and Jagermeister stages kicked in: headlined by Kurokuma and Ghosts Of Men respectively, they added to the sense of massive anticipation that was building before the big guns went off at the weekend. We’re so very proud of all the new bands who played our two smaller – but still super-cool! – stages; they’re the future of metal, right there.
By Friday morning we were pumped up and ready – and so were you. The surge of energy from the Ronnie James Dio Stage crowd that greeted the speed metal maniacs Acid Reign, the iconic rockers Wildhearts and the dub warriors Skindred was immense. Our mate Benji Webbe had us in stitches all the way through Skindred’s set, doing a quick rendition of Van Halen’s ‘Jump’ and getting thousands of people to perform the ‘Newport Helicopter’. If you don’t know what this is, check Youtube, and duck for cover.
As for Devin Townsend, the man is uncategorisable, unclassifiable and unstoppable. You never know what he’s going to bring to the stage – you just know it’s going to leave you with jaw dropped and brain fried. Add Heavy Devy’s set to absolutely pulverising performances by Evile and Napalm Death at the Sophie stage, and that’s a Friday at BOA to treasure!
Saturday was just as epic. The day kicked off bright and early at the Ronnie stage with the über-heavy Borstal, followed up with a list of world-class acts – While She Sleeps, doom veterans Paradise Lost and black metal stars Cradle Of Filth. After we ran across to see the amazing, atmospheric Winterfylleth and our chum Phil Campbell, formerly of Motörhead, finish up the Sophie stage with his Bastard Sons band, we made it back to the main stage in time to witness the absolutely monstrous Kreator destroy Bloodstock. You want to talk about thousands of people losing their minds? You should have seen it when frontman Mille Petrozza screamed “It’s time to raise the Flag Of Hate!” in a blizzard of pyrotechnics.
To say we were a bit hungover on Sunday morning is putting it lightly, but did we let that stop us? By now, you know the answer to that... with a latte in one hand and a cool beer in the other, we hailed the mighty Diamond Head and Orange Goblin, before Northern Irish rockers Therapy? brought the anarchy to the Ronnie stage. If it was authentic British heritage you were after, it doesn’t get better than Saxon, and what remains to be said about the metal gods Judas Priest, who played the classic ‘Rocka Rolla’ for the first time since 1976 on our stage?
If you still had energy left over after all that, you had the Bloodstock art gallery, the late-night silent discos and DJ sets, and even our Movie Night horror-film session to enjoy. There was literally no reason to sleep at this year’s Bloodstock... unless you’d been awake for five weeks, like we had. By this point, we were lying on the floor, giggling hysterically in relief and pride, and clutching a shot of something very strong.
The atmosphere over those massive five days was like nothing we’ve experienced before. After the two years we’d all been through, Bloodstock 2021 didn’t just feel like a festival – it felt like a rebirth. If there’s any upside to the pandemic, it is that we appreciate and love our community and our music even more than we did before.
We did it. You did it. The bands did it. We all did it – together. Viruses come and go, but music is immortal. Be safe, and we’ll see you in August! 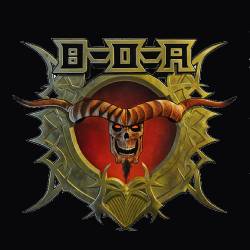