Another year, another mega metal weekend, and Bloodstock celebrated its eleventh installment in typically robust style. Almost 11,000 metalheads made the pilgrimage to the now well-trodden grounds of Catton Hall, making BOA 2011 the biggest Bloodstock yet. As usual, we welcomed a throng of newcomers alongside the hardcore of regulars, and the atmosphere as always was truly special. With rain on Thursday night, the temperamental British weather threatened to be anything but special, but come Friday, the weather gods were smiling, the clouds had broken and the festival enjoyed a balmy few days of mirth, merrymaking and, of course, metal!

The early birds – and blokes, obviously – were treated to a special Thursday night entrée as Beholder, Revoker, Xerath and Achren stormed the Sophie Lancaster Stage to really get things warmed up. The Sophie Stage also saw Bloodstock’s first ever world class comedy acts in the shape of Jason Rouse and Steve Hughes, both of whom returned to wrap things up on Sunday.

From the moment that The Defiled hit the Ronnie James Dio stage on Friday until the day ended with a hit-filled set from the legendary W.A.S.P., it was clear that BOA 2011 would be another classic year. Friday’s highlights were many; Wolf putting in their third Bloodstock appearance, thrash-tastic sets from Forbidden, Coroner and Kreator, a truly earth-shattering tour de force from the mighty Triptykon and, of course, the return of the amazing Devin Townsend, who put the ghosts of the previous year’s technical glitches firmly to rest with a truly stellar display. With more bands than ever performing on the Sophie Stage, it fell to the ludicrous but loveable Lawnmower Deth to top a day which featured memorable turns from October File, Byfrost, Arthemis and many more.

Saturday got underway in fine style, Skeletonwitch’s mash-up of black/death/speed/thrash/whatever kicking off main stage activities and blasting hangovers into oblivion. From the power metal of Grave Digger and Rhapsody Of Fire, to the cerebral stylings of Therion, Wintersun and ex-Emperor man Ihsahn, it was another great day, crowned in inimitable fashion by the one-and-only Immortal. With a full moon glowing overhead, the Norwegian trio put in a performance truly worthy of headliners, their ice-cold yet catchy black metal hymns providing the perfect ending to the festivities. Over of the Sophie Stage, meanwhile, fans enjoyed more comedy from Keith Platt and Steve Hill, and another quality line-up of bands including Hammer Of The Gods, The Rotted and a bristling set from New Wave of British Heavy Metal veterans Angel Witch.

Anyone who caught Hell’s Sunday morning performance opening the Ronnie James Dio stage witnessed one of the outstanding shows of the entire weekend. And what a way it was to kick off the final day. Both Napalm Death and At The Gates were back to tear us a new one while Swedish power metal kings HammerFall also made their long-anticipated return to Bloodstock. Whilst Exodus and Morbid Angel both turned in simply incredible performances, one of the day’s most memorable events was the crowd singing along with Primordial after vocalist Nemtheanga suddenly lost his voice. An unforgettable Bloodstock moment. With another strong Sophie line-up including the likes of Evil Scarecrow, Power Quest and Criminal coming to a close, one of metal’s founding fathers Motörhead laid waste to the main stage as only they can. Lemmy says it’s just good old rock’n’roll, but whatever you call it, it was one hell of a way to round off another incredible year for Bloodstock.

And so the festival continues to go from strength to strength, fueled by the passion shared by the fans, the bands and all the individuals who toil so tirelessly to make the event what it is. Once more, by the fans, for the fans, forever! Even if the world ends in 2012, we think Bloodstock might just keep going… 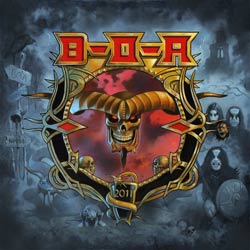