With its strongest line up in 8 years and the highest number of metal heads in attendance since its conception - Bloodstock Open Air truly came of age in 2008.

When we first started out on the journey of Bloodstock in 2001 we were told by so many that there just weren’t enough metal fans in the UK to hold a metal festival. Nearly 8 years on over 8,500 people descended on the quiet village of Walton On Trent in Derbyshire to celebrate 3 days of full on metal.

Opeth, Dimmu Borgir and Nightwish headlined the weekends festivities. And we were fortunate enough to secure ‘At The Gates’ who reunited for the first time in many years to offer up an exclusive UK show in 2008 and their fans were not disappointed. Special Guest’s ‘Helloween’ turned out a stunning performance alongside Iced Earth, Overkill and so many more.

Organisers Paul, Rachael and Vicky have always aimed to get the festival to 20 – 25,000 capacity seeing this as a comfortable level which would allow the festival to retain its intimate safe and friendly atmosphere. The fans who attended Bloodstock this year truly excelled themselves as we had the highest number of metal heads attending in the festivals history and the whole atmosphere front of house and back stage was awesome.

The unsigned stage turned up some amazing metal acts that we know will be around for many years to come - Marshall Law and Conquest of Steel made a guest appearance on the Thursday night and really set off the weekend’s metal party with a bang. The metal karaoke tent run by the infamous 4 DJ's of the Apocalypse entertained well over 4000 metal heads each night after the main arena closed down and was as always packed to the rafters.

Valhalla smiled down on Bloodstockers this particular weekend as the UK was experiencing yet another full on frontal from the rain and other festivals were struggling against a tide of mud baths – Bloodstock received no more than a cup of it. Roll on 2009... 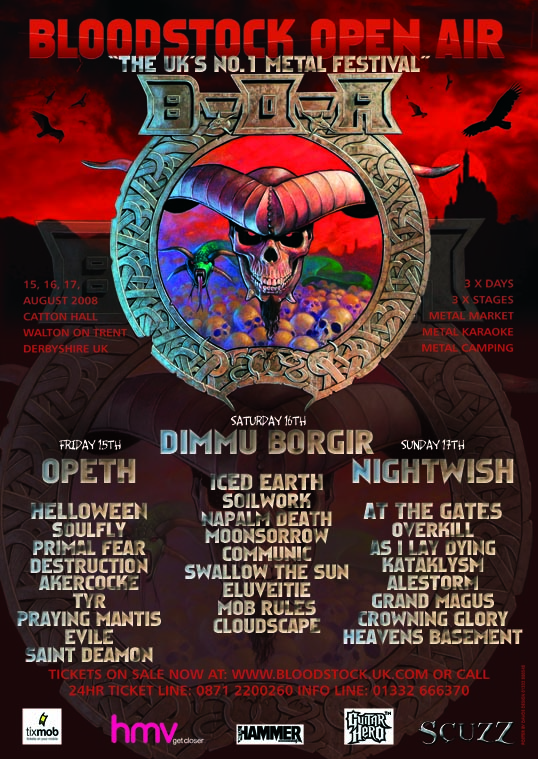