For its tenth anniversary, Bloodstock Open Air staged the biggest and best festival yet. Over ten thousand metalheads thronged to the hallowed grounds of Catton Hall in Derbyshire for a wild weekend of celebrations to the tune of some of the best metal bands on the planet.

As always, the atmosphere was electric, with Bloodstock veterans and yet another wave of enthusiastic first-timers uniting to enjoy the spirit of camaraderie which makes the festival unique. Rain greeted the early arrivers but it wasn’t long before the clouds rolled back and the UK’s premier metal event really got underway in style.

Amongst a number of new additions and improvements, both the unsigned stage  - renamed the New Blood stage - and the Sophie Lancaster Stage were expanded in size and hosted dozens of excellent bands, new talent and established names alike. The highlights were numerous with the likes of Steelwing, Enforcer, Powerwolf, Benediction and Sylosis lighting up the Sophie Stage while over 30 up-and-coming outfits strutted their stuff on the New Blood stage. The future of metal has never looked better… The main stage was also renamed as the Ronnie James Dio Stage, a universally popular move in memory of one of the greatest figures the world of rock and metal has ever seen.

The events of day one were typical of the metal community in general and of the Bloodstock fraternity in particular. Alongside sterling sets from the likes of Rage, Sonata Arctica and Meshuggah, UK doom veterans Cathedral stepped in at the last minute to deputise for Behemoth who were forced to pull out due to frontman Nergal’s recent illness. Needless to say Cathedral were welcomed with open arms and turned in a superb performance. No one present, however, will ever forget Opeth’s moving tribute to the late Ronnie James Dio. Bravely stepping in for the absent Heaven And Hell, Opeth held the audience spellbound with a truly stunning rendition of the Rainbow classic ‘Catch The Rainbow’, dedicated to Ronnie and a truly amazing life creating the music we all hold so dear.

Day two was littered with memorable turns, from Evile and Onslaught’s thrash attacks to Obituary’s deadly death metal, via an awesome return to form from industrial metallers Fear Factory and, of course, a highly-entertaining headline slot from the returning Children Of Bodom who last graced the Bloodstock stage during the inaugural outdoor event back in 2005.

Day three was equally thrill-packed, Bonded By Blood and Holy Moses bringing the thrash, Suffocation, Gojira, Bloodbath and the legendary Cannibal Corpse dealing the death and Doro playing one of the best shows of the weekend while Gwar and Korpiklaani dished out some liquid-drenched fun, albeit with very different kinds of liquids… It then fell to the one and only Twisted Sister to stage a simply mind-blowing finale, sending the entire festival into one massive sing-along as the New Yorkers reeled off hit after hit and brought Bloodstock’s first decade to a spectacular close.

It was another year but so much more than just another Bloodstock. As fans said their farewells and the hard working crew began putting the festival back in its box till next time, there was time to reflect on an incredible achievement. From the ground up and from scratch and with nothing but passion, belief and love for heavy metal music and all it stands for, Bloodstock has made a dream come true; a real metal festival for real metalheads – by the fans, for the fans, ten years and counting. To 2011 and beyond! 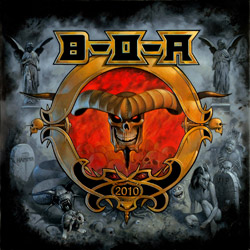