The festival began in traditional style with Thursday night revelry from the early birds who ate, drank and were merry whilst being ably entertained on the Sophie stage by Motherload, Bull-Riff Stampede, OAF, Ravenage and the world’s premier metal tribute to the Bee Gees aka Tragedy. A glitter-coated start to a great weekend indeed!

Friday kick-started the main event with a line-up on the Ronnie James Dio stage that’d make grown men weep; in fact, quite a few did – moved to tears (and beers) by stellar sets from legendary acts such as Death Angel, Dark Funeral, Voivod and Teutonic terrors Accept. Then there was the one and only King Diamond. What can we say? If your sorry ass missed the Great Dane’s headline performance, you only missed one of the most amazing shows in Bloodstock’s entire history. The horror, the howls and the widdly guitar solos were legion! And following an all-to-close brush with death, the King himself was sounding better than ever.

Saturday’s main stage action was every bit as exciting as Stormbringer, Beholder, 3 Inches of Blood, Kataklysm, Gojira, Sabaton and Avantasia rocked the socks off the assembled masses. Sabaton even managed to turn adversity to their advantage as initial stage gremlins allowed frontman Joakim Brodén to do an improvised observational comedy routine which amazingly contained (almost) no swearing. A special shout must also go out to the UK’s own Hell who staged a truly stunning show worthy of any headliner. Although our actual Saturday headliners Lamb Of God haven’t quite stared death in the face like good old King Diamond, metalheads worldwide will be well aware that recent times have been far from easy for this band. It was utterly thrilling, then, to have them back doing what they do best and tearing us all a new one in the process.

Just when you thought it could get any better, along comes Sunday and a main stage bill awash with class old and new. Gama Bomb and Fozzy entertained, Whitechapel and DevilDriver crushed, Sacred Mother Tongue stuck us one and Amorphis went off on one – perfect! Did Exodus summon the fiercest circle pit of the weekend? It depends who you ask, but from any vantage point, the Bay Area veterans thrashed the hell out of Bloodstock like their lives depended on it. Bandages secure and bruises healing, the masses enjoyed an immense end to the day with flawless sets from both Anthrax and Slayer, the latter paying tribute to fallen axeman Jeff Hanneman with a commanding performance.

As always, both the Sophie Stage and the New Blood Stage offered oodles of quality, the latter in particular a vital part of Bloodstock’s commitment to up and coming talent, of which there was plenty. The outstanding quality of the bands who take part in our annual Metal 2 The Masses campaign never ceases to amaze us, and it was a pleasure and a privilege to offer so many of them the chance to perform in front of the best audience on the planet. Highlights on the Sophie stage really were too many to mention, but it’s worth saluting headliners Scar Symmetry, Last In Line and Dying Fetus for totally storming the place. Reformed Brit thrashers Xentrix won’t forget their show in a hurry, such was the frenzied response from the fans, and Powerquest’s decision to play their final show at Bloodstock made for an unforgettable and truly emotional experience.

Maybe we’ll have to find a brand new word in the future, but for now, ‘unbelievable’ is the only one that really describes 2013. Wherever we go from here, it’s sure to a hell of a ride. By the fans, for the fans – see you on the other side! 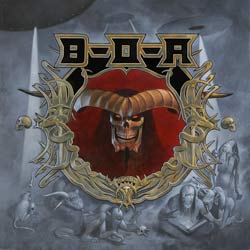