Bloodstock 2014 was yet another runaway success for everyone involved. Building on the impressive progress of previous years – not least the significant audience increases of 2012 and 2013 – 2014’s momentous event not only entertained the masses with four days of metal mayhem, the live Internet video stream (now in its third year) enjoyed well over two million views globally.

As is now traditional, festivities got underway on the Thursday evening with much merriment and an ale or ten in the company of Jaldaboath, Monument, Incinery, Gehtika and Balls Deep. Friday kick-started the main event with yet another stellar line-up on the Ronnie James Dio stage; a genuinely stunning opening set from Bloodshot Dawn, a bit of good old death’n’roll from Entombed A.D., majestic might and melody from the returning Primordial, classic old school thrash from Flotsam and Jetsam, eye-gouging grooves from Prong, the sickeningly heavy Triptykon, Hatebreed tearing us all a new one – again – symphonic black metal blasts from Dimmu Borgir, all capped off with the sludgy Southern Sabbath worship of Down.

Saturday’s main stage action was no joke either. Check it out: Evil Scarecrow, Shining, Decapitated, Crowbar (now that was HEAVY), Lacuna Coil (our 2007 headliners), Children of Bodom (also back again and headliners of the very first outdoor Bloodstock), the ever-classy Carcass, and a simply explosive headline show by Emperor.

Sunday worship was equally stunning with the order of service seeing Arthemis and Aborted warming us up, ReVamp and Avatar strutting their stuff, Obituary and Biohazard beating us down, Saxon bringing the heavy metal thunder, Amon Amarth bringing what looked like a Swedish Stonehenge, and headliners Megadeth dishing up a crowd-pleasing greatest hits set that showed a class act still at the top of their game.

As always, both the Sophie Stage and the New Blood Stage hosted shedloads of talent, the latter in particular hosting nearly 40 emerging acts, emphasizing Bloodstock’s ongoing commitment to up and coming bands. Sophie headliners Rotting Christ, Hellyeah and Satan were supported by a superb line-up that included the likes of Skyclad, Sister Sin, Graveyard and, well, frankly far too many to mention. Needless to say the Sophie tent was packed beyond capacity more than once.

The most significant new addition to the festival was a major art exhibition. Christened the Rock and Metal (RAM) Gallery, the installation is intended to be a permanent addition to Bloodstock and will provide a showcase for a varying selection of rock-related art and memorabilia. The concept came from Bloodstock co-founder Paul Raymond Gregory who, as most of you will know, is also an acclaimed artist with an extensive body of work which includes many famous album sleeves and monolithic pieces inspired by the writings of JRR Tolkien.

Paul’s first ever album cover commission was for Saxon’s ‘Crusader’ which was released in 1984, so launching the RAM Gallery on the 30thanniversary of Paul’s entry to the metal world is auspicious indeed. 2014’s inaugural gallery included all the original Bloodstock artwork going right back to the first indoor festival in 2001, alongside a substantial selection of Paul’s album art. Paul himself was in attendance signing copies of his book ‘Beyond Time and Place’, and overall the feedback on the gallery was fantastic.

Another year, another blinding Bloodstock, and we couldn’t have done it without the amazing bands, incredible fans, and the army of industry professionals and valiant volunteers who make it happen. The Bloodstock team remain truly blown away by your loyalty and support. We should do it all again sometime… 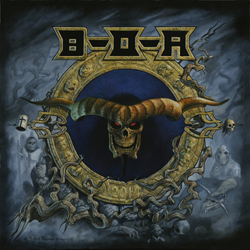