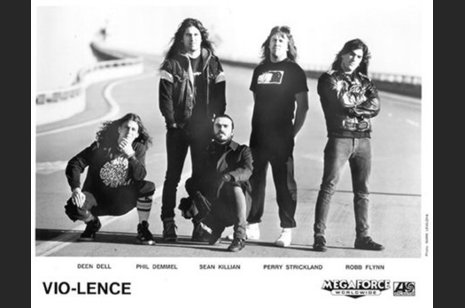 Vio-lence is an American thrash metal band formed in 1985 in the San Francisco Bay Area.
Throughout its existence, they released demo tapes, one EP and three studio albums. Vio-lence is best-known for their association with the 1980s Bay Area thrash metal scene, and often credited as one of the leading lights of the second wave of the genre, along with Pantera, Sepultura, Sacred Reich and Dark Angel as well as their Bay Area counterparts Testament, Death Angel and Forbidden.

Their most stable line-up was Phil Demmel and Robb Flynn on guitars, Deen Dell on bass, Perry Strickland on drums and Sean Killian on vocals; this lineup recorded all their studio albums. After breaking up in 1994 and reforming for occasional live performances from 2001 to 2003, the members of Vio-Lence reunited in January 2018 for a benefit of Killian, who was battling with liver cirrhosis.

The band announced their third reunion in January 2019