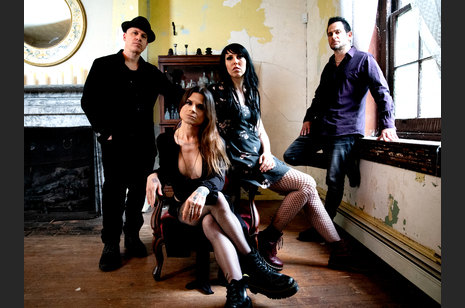 Life of Agony is a hard rock/metal crossover band from Brooklyn, NY. Best known for their debut album "River Runs Red", LOA has shared stages with the biggest names in rock for over two decades, including Metallica, Black Sabbath, and Slipknot, and has sold over 1 million records worldwide. Other studio albums include "Ugly", "Soul Searching Sun", "Broken Valley" and "A Place Where There's No More Pain." New studio album "The Sound of Scars" is due Oct. 11, 2019 (Napalm Records).

Life of Agony emerged from the New York music scene in the early '90s with one of the most distinctive sounds in its genre. Best known for its 1993 metal/crossover debut "River Runs Red" (Roadrunner Records), named by Rolling Stone as being one of the "100 Greatest Metal Albums of All Time" the band instantly built a die-hard, cult following. For over two decades, the group toured relentlessly all over the world, sharing stages with the biggest names in rock, including Metallica, Black Sabbath, Ozzy Osbourne, Foo Fighters, and The Red Hot Chili Peppers. LOA went onto release two more studio albums for Roadrunner: "Ugly" ('95) and "Soul Searching Sun" ('97), before signing to major label Sony/Epic Records in 2005 to record "Broken Valley" with producer Greg Fidelman (Slipknot, Metallica). Life of Agony has sold over one million albums to date.
In 2017, LOA released its 5th studio album, titled "A Place Where There's No More Pain". Rolling Stone hailed it as "One of the Most Anticipated Albums of the Year" ( Read Article > ) Life of Agony's "A Place Where There's No More Pain" is available on Napalm Records. The album was produced by Matt Brown & Life of Agony and mastered by Ted Jensen (Alice in Chains, Machine Head, Deftones).
On January 22, 2018, Life Of Agony welcomed new drummer Veronica Bellino into the band, best known for her work with Rock & Roll Hall of Famer Jeff Beck, DMC, Richie Sambora/Orianthi, and Carmine Appice/Slamm. The current Life of Agony lineup features vocalist Mina Caputo, guitarist Joey Z, bassist Alan Robert, and drummer Veronica Bellino.
LIFE OF AGONY toured the USA and Europe in 2018 with its highly successful "Rise of the Underground" Tour 2018. The dates kicked off with two sold-out, hometown warm-up gigs April 18th & 19th at Saint Vitus in Brooklyn, and concluded November 2nd as headliners of The Sound of Revolution Festival in Eindhoven, Netherlands. Watch the entire show here >. The band closed out the year with TWO SOLD OUT co-headlining shows with scene veterans SICK OF IT ALL.