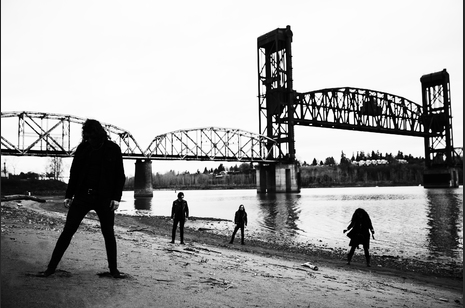 Conceived in the summer of 2017 by singer/songwriter Gabriel Franco after the dissolve of his former band SPELLCASTER, IDLE HANDS initially began as a creative outlet for a musically frustrated Franco.

“I was stuck in a rut, for years I had played bass for a mildly successful band that was doing great on the outside but falling apart on the inside. Indecision and laziness ruled the game. Getting folks to come to practice was a nightmare. I would write these songs too, have them all put together with vocal melodies and lyrics, the whole deal. The band would like them, then start to change things here and there, the singer wouldn’t pay a dime of attention to the point of the song or the lyrical content and by the time it was over they were just destroyed. People liked them but it still sucked because I knew what they could’ve been. Devastating and so discouraging… That fell apart like we all knew it would. 7 years of hard work brought down by a mixture of bad communication, ego and self-doubt. When it ended I knew I couldn’t do that again, I needed to be in charge of the writing process. That’s when IDLE HANDS began.”

With the help of Sebastian Silva, and soon after Colin Vranizan, the team was able to put together a rough studio recording of their first song “Blade and the Will” in early 2018. This track was shopped to labels with no success, but did warrant a small interest from the underground music community. Soon after the band released “By Way Of Kingdom” – a 3 ½ minute hook laden anthem that pushed them further upwards in the underground, with local musicians taking interest, but still nothing from industry professionals. Bassist David Kimbro joined shortly after and the live line-up was complete, but It was not until the band released their critically acclaimed “Don’t Waste Your Time” EP - A 19 and ½ minute emotional juggernaut garnering high praise in the heavy metal underground – that things began to take off. Within a matter of months, the band had acquired a European booking agent, and signed to Germany based Eisenwald records, as well as securing support slots for bands the likes of PARADISE LOST, TRIBULATION, UADA, JAG PANZER, MIDNIGHT, HAUNT &amp; GAAHLS WYRD.

Critics raving the release as a unique blend of old school Heavy Metal, Goth, New Wave and Post Punk genres. 2 Music videos were filmed for BY WAY OF KINGDOM, and I FEEL NOTHING, the EP’s melodic closing track, with the band being nearly struck by lightning during the production of the latter. Shortly after it was announced that the band would be making appearances at the prestigious European festivals KEEP IT TRUE XXII in Germany &amp; MUSKELROCK in Sweden respectively. During this period the band received accolades in notable metal publications KERRANG!, DECIBEL, METAL INJECTION and METAL HAMMER among others as well - Including #1 newcomer of the year in DEAF FOREVER magazine, further cementing their position in the modern heavy metal frontier.

With all this momentum, slowing down was not an option for IDLE HANDS. In early November 2018, only 4 months after the release of “Don’t Waste Your Time” The band entered Sharkbite studios in Oakland, CA with esteemed producer Zack Ohren (MACHINE HEAD) to begin drum production on their debut full-length “Mana” with drummer Colin Vranizan completing his takes in just under 2 hours.

In regards to the approach and writing process, Franco comments: “MANA is 8 months for 40 minutes. I spent every waking moment for the better part of the last year thinking about some detail or another regarding this album and I am very satisfied with the end result. Also immensely grateful to have such talented and open minded bandmates willing to work with me on sometimes questionable ideas. One track that stood out in particular was “Dragon, Why Do You Cry” - I got a some laughs from the dudes over that one [laughs] but there is substance in all these tracks, and we all put real hard work and honest emotion into everything we do.”

Composition pre-production for MANA took place in November, and throughout the months of December and January, Franco and Silva tracked all guitars and vocals at Falcon Studios in Portland, OR with Producer/Engineer Gabe Johnston. It was during this period that bassist/vocalist Brandon Hill joined the band as a new full time member.
Final mixes were literally approved hours before the band hit the road on their first US tour with HAUNT &amp; HELLFIRE. A 12 date west coast run with packed houses across the board as well as a sold out show in Oakland, CA.

After a month at home, the band flew to Amsterdam to kickoff the 3 week NORTHERN GHOSTS tour with GAAHLS WYRD, TRIBULATION & UADA. This saw the band opening to largely black metal crowds and many confused faces. However, the band was accepted and the tour was a resounding success. Playing 16 shows across western europe on the largest stages the band had thus far set foot on. One more month at home and the band returned to Europe for a 50 day, 34 show tour in support of their upcoming full length MANA. Bringing along new guitarist CORY BOYD to the stage and moving Gabe to the frontman position. This tour saw the band perform alongside such greats as JAG PANZER, ELECTRIC CITIZEN, KING DUDE, and MIDNIGHT among others. As well as opening the Saturday set of KEEP IT TRUE XXII to a packed house of 2800 metalheads in Bavaria. The band breaking merch sales records at the festival sold out almost every record they had before the album was even released. Athens, Budapest, London, Munich, Prague and more. The tour wound its way across time and space until the band was once again on a flight home at the end of yet another succesful tour.

Mana, released on May 10th, was well received garnering 250+ very positive online reviews, 23 features in print magazines across the world including DECIBEL (USA), ROCK HARD (DE), DEAF FOREVER (DE), METAL HAMMER (GR), LEGACY (DE), NOISE (PL), CLOSE UP (SE) among many others with more coming in each day. Over 100,000 plays Bandcamp, 18k Spotify listeners and over 180,000 collective YouTube views. The band sold out their first pressing of 1000 vinyl the day Mana was released.
Now back stateside, Summertime is writing time and the preparation for summer festivals at PSYCHO LAS VEGAS supporting OPETH, ELECTRIC WIZARD, CORROSION OF CONFORMITY among others and VANCOUVER ISLAND METAL FEST with heavy metal stalwarts ETERNAL CHAMPION.

USA and Canadian tour dates are confirmed for late 2019 and to be announced soon. There is no break in sight. The bands future is not in Idle Hands…