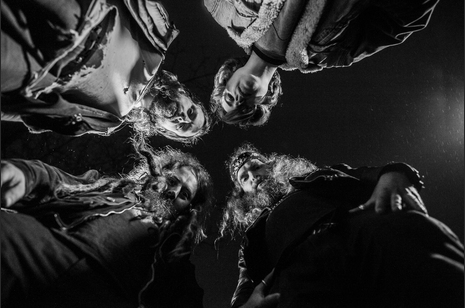 Vocalist Jake Harding’s distinctive voice jumps between soul wrenching screams and a blues-soaked croon reminiscent of the likes of Scott Walker and Nick Cave.  Since their inception the band have been keeping busy gigging and touring throughout the UK, including shows with Ufomammut, Oathbreaker, Noothgrush, Cough, Oozing Wound, Bong, BlackMoth, appearances at London’s Desertfest and HRH Doom Vs Stoner in Sheffield, and more recently sharing the stage with Crowbar, Lingua Ignota and opening for Ministry at Shepherds Bush Empire.

Their debut album ‘Welcome To Nothing’ was released in 2016 on Black Reaper Records and showcased a crushing display of mournful riffs and filth laden swagger, all underpinned with a gothic tinged melancholy.  After a solid year of touring, Grave Lines released their second album ‘Fed Into The Nihilist Engine’ in 2018 on New Heavy Sounds, receiving high praise from fans and pressalike.  The release saw the band explore a more expansive sound, honing their unique brand of misery and delving deeper into lyrical themes of negativity, self-loathing and existential dread.

After a swathe of glowing reviews and features the band continued to tear it up across the UK and Europe in 2018 / 2019, including tours with Dystopian Future Movies on the back of aj oint release titled ‘Beholden to the Flame’, seeing the bands combine forces across three collaborative tracks.

Grave Lines are currently working on their 3rdalbum which will be released with New Heavy Sounds and will see the band delving into greater depths of their collective psyche and further exploring their eclectic brand of heaviness and gloom.  Leading into this they are set to bring their enigmatic sound to stages Europe wide in 2020.
Grave Lines are fully charged to be taking a moment out from fusing together a third album to come and bring our heavy misery to the stage at this year’s Bloodstock. A lineup of total legends, respected peers and nefarious friends throughout has made us pumped to be there for one hell of an enormous weekend... 2020 is the year!