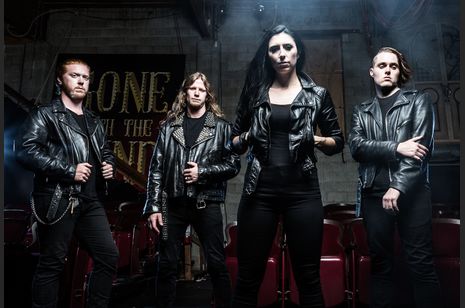 Vancouver, Canada based Unleash The Archers were formed in late 2007 by vocalist and front-woman Brittney Slayes, together with her partner and the band’s drummer Scott Buchanan.

Spanning the gap between various forms of metal, genre-blending has become their speciality, and the resulting product is a potent mix of intelligent song-writing and technically versatile musicianship. Guttural screams likened to blackened death combined with the soaring wails of a four-octave mezzo-soprano in power-metal style have created a sound unlike anything else in the industry. By weaving the aggression of the more extreme genres into the intricacies of traditional heavy metal, this diversity has allowed Unleash The Archers the opportunity to share the stage with bands of every ilk, from folk metal to power metal to death metal and beyond.UTA have been described as “show-stealers” and“wildly entertaining” by fans and peers alike, and they strive to put on a show that will stick with you long after you’ve left the venue.
Their first three studio recordings were all released independently, and through extensive touring they were able to carve out a rock solid fan base across North America and Europe. With their signing to Napalm Records in 2015 that fan base has broadened to include South America, Australia and Asia, and despite several member changes the band has continued to stay true to their genre-defying brand of heavy metal.