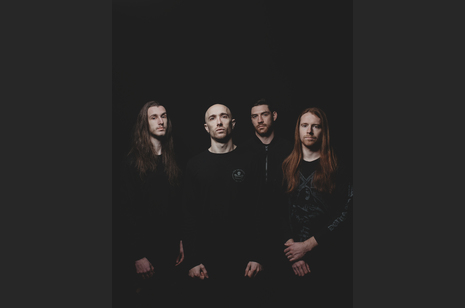 The world is in chaos. Societies are angry and divided. The future looks bleak. But all is not lost: music still has the power to light up those ominous, cloudy skies.
Masters of enlightened, neck-wrecking turbo-thrash, Sylosis is returning to the barricades after four years of silence, armed with its strongest album yet and a renewed sense of purpose. The fightback against the dying of the light starts here.

Formed in Reading at the turn of the millennium, Sylosis swiftly stood apart from everything else that was happening in the British metal scene at that time. As the metalcore hordes began to dominate the mainstream, guitarist and chief songwriter Josh Middleton pursued a singular, defiant course, blending the machine-gun precision of thrash with the monstrous power of modern extremity and frequent flashes of progressive flair. Exploding into view with debut album Conclusion Of An Age in 2008, Sylosis established itself as a major player in the UK scene with live shows that swiftly became notorious for their riotous, celebratory vibe.

Ambitious, sprawling records that further set Middleton’s crew apart, both the epic Edge Of The Earth (2011) and its grandiose follow-up Monolith (2012) consolidated Middleton’s band’s reputation as irresistible mavericks: these were ambitious but reassuringly nails-hard metal records with bags of intelligence and soul, and an exhilarating alternative to the mainstream metal norm. Years of touring enabled Sylosis to refine its identity even further for 2015’s Dormant Heart, as Middleton explored new ideas within his band’s immaculate metallic squall and wrote some of his most devastating anthems to date.

As a result, the news that Sylosis were to embark on an indefinite hiatus early in 2016 came as a huge shock to fans and media alike. While seemingly at the height of his musical powers, Middleton was beginning to feel restricted by his own myopic vision. But four years on, normal service is due to resume, as he relaunches his band with stunning new album Cycle Of Suffering. After spending his time off exploring new creative avenues and contemplating his own artistic desires, Middleton returns to Sylosis with a rejuvenated spirit.

“When we went on hiatus, I basically felt like I’d boxed myself in a bit musically,” he explains. “I’d set up so many rules about what we could and couldn’t do musically, I felt I’d ended up making things hard for myself. When I decided to start this up again, I just decided to write whatever I wanted to and not worry about what the idea of Sylosis is. I can just be a bit more free. I’ve had a big shift in my approach towards writing the music for this band. The record was written quite a while ago, so it’s not like I had a few years off and then wrote an album, but I did have a fresh mindset and a new attitude towards writing for Sylosis. I tried not to limit myself as much.”

As ever, Josh is being needlessly modest. Cycle Of Suffering is immediately recognisable as the most vital and explosive record yet to be released under the Sylosis name. While still bearing many of the band’s expected sonic hallmarks, the likes of I Sever and Shield take a subtly ingenious approach to state-of-the-art thrash metal, infusing everything with a sense of perpetual invention and untrammelled intensity. There are huge melodies and gleaming hooks erupting throughout this sustained, 50-minute burst of cutting-edge brutality, but Cycle Of Suffering is bold and exploratory too: everything from slow-burning cautionary tale Calcified to the acoustic-led but venomous Arms Like A Noose indicates that Sylosis has evolved as a band, while its leader’s song writing blade has never been sharper. Cycle Of Suffering simply the best thing that Sylosis has ever produced.
“It’s a revitalised version of the band! Everything is more focused,” Middleton agrees. “Maybe that’s potentially worrying to some Sylosis fans because we’ve been known to do long-ish songs and cram lots of riffs into them, and I love that too, but this time I was trying to focus in on the best bits. I think maybe my attention span has got worse as I get older, so if the song’s over four minutes long I’m like, ‘Let’s get this wrapped up now!’ [laughs]. But it’s also the first album with Ali [Richardson] on drums. He’s done a great job. He’s brought something new to the band. He’s got a very unique style and a distinctive sound and that’s added to refreshing the sound and mixing things up.”
No stranger to lyrics with a profoundly personal edge, Josh has ventured even further into his innermost thoughts on Cycle Of Suffering. As its title suggests, this is an album weighed down by the world’s troubles, as Sylosis noisily conspire to wring droplets of hope from humanity’s shared sorrows.

“The album title refers to accepting the fact that suffering will be an inevitable part of everyone’s lives,” Middleton says. “There are a lot of distractions in the world that people use to hide or run away from unpleasant situations and thoughts, so it’s about accepting that you just have to sit with discomfort every now and then. I guess suffering is an inevitable part of being human. I asked my wife if the album title was needlessly negative or putting out a bad vibe but she said, ‘Well, it is kind of how things are!’
Lyrics only come to mind if I am a bit down or depressed, so that just happens to be what I usually tend to write about. But I’m a little bit older and better able to deal with things these days and hopefully that’s there in the songs too.”

Cycle Of Suffering’s most emotionally powerful moment comes at the album’s close: a grandiose and melodramatic funeral march, Abandon showcases Sylosis’ newfound creative freedom and maturity while sending waves of melancholy shivers down the listener’s spine. It’s a magical moment on a wonderfully complete and coherent album that adds an array of new textures and tones – all of them dark - to Middleton’s metallic canvas.

“I'm plagued by my own eclectic musical tastes, where I listen to so much of one kind of music or one band in particular and I end up thinking, ‘Oh I wish my band sounded like this!’” notes Middleton. “I get obsessed with things like Radiohead’s OK Computer or Tool, this thinking man’s music, and then I think, ‘Oh god, I’m just playing meathead thrash!’ Then a few months later, I’ll put Arise on and I’m like, ‘Oh my god, I love Sepultura!’ So I want us to have a recognisable sound, but to also show all the influences I have too, and that’s hard. As long as it’s dark and bleak and not happy, it should be okay (laughs).”

Not just a ferocious and commanding comeback but a wholesale reassertion of musical values and vivacity, Cycle Of Suffering seems certain to restore Sylosis to its rightful status as standard bearers for ultra-modern thrash. This is balls-out and blazing metal at its best, but with a big heart and vast emotional depths: once again, the kind of life-affirming noise that made Sylosis a big deal in the first place, but somehow bigger, better and imbued with ever more self-belief. Sylosis is back and the future is for the taking.

“I feel really revitalised and excited about doing Sylosis stuff and taking it as far as I can. This is definitely not a final chapter or anything like that! Having time apart was healthy and I feel really good about it now. I’m excited about moving forward.”