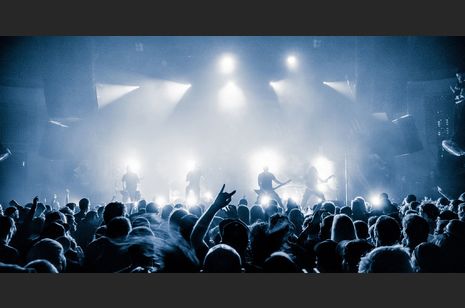 Meshuggah stand alone. The most inventive and creative metal band of the last 30 years and one of the most widely revered, Meshuggah have been standard bearers for forwardthinking creativity in heavy music throughout their illustrious careers.

First conjured from the ether in Umeå, Sweden, by guitarist Fredrik Thordendal, frontman Jens Kidman in 1987 and bassist Peter Nordin, early incarnations of the band took a blowtorch to established rules for modern metal, warping the essence of Bay Area thrash to their own ends, and hurling countless seemingly disparate influences into the resultant brew. Signing with Nuclear Blast Records as the ‘90s clicked into gear, Meshuggah released their debut album Contradictions Collapse in 1991, garnering solid reviews but limited commercial impact.

It was when the band coalesced around a settled line-up of Thordendal, Kidman and Nordin,alongside rhythm guitarist Mårten Hagström and powerhouse drummer Tomas Haake, that their true artistic mission became apparent. Tentatively showcased on 1994 EP None,Meshuggah’s sound was undergoing a complete overhaul. The end result was Destroy Erase Improve. Brutal, complex, perverse and relentless, D.E.I. noisily rejected the early ‘90s metalstatus quo, jettisoning all old school influences and dragging heavy music glitching and shrieking into a far more interesting and challenging future. The recruitment of a new bassist, Gustaf Hielm, only strengthened the band’s momentum and resolve.

A subsequent tour of Europe as main support to Machine Head introduced the Swedes’ genre-shattering music to an ever-growing audience, and by the time Meshuggah released their third full-length album, Chaosphere, in November ’98, they were firmly established as contemporary legends. Far more vicious and unhinged than its predecessor, Chaosphere heralded the finally shrugging off of any elements recognisable from metal’s past or present,via visceral but clinical waves of polyrhythmic destruction like the now immortal New
Millennium Cyanide Christ. Now universally acknowledged as a unique and potent musical force, Meshuggah toured extensively alongside both Slayer (in 1999) and Tool (in 2001), demonstrating an uncanny ability to fit in everywhere and nowhere along the way.

A new century became the perfect springboard for Meshuggah’s most significant evolutionary leap. Eschewing the frantic bedlam of Chaosphere for something more dynamic, powerful, hypnotic and heavy, the band rebuilt their sound from the ground up for
2002’s Nothing. Once again widely hailed as a masterpiece, the album’s densely psychedelic take on futuristic brutality enabled Meshuggah to inject vastly more atmosphere and drama into their much-praised live shows. Meanwhile, both 2004’s one-track brain-blitz I and the
following year’s conceptual/experimental splurge CatchThirtyThree suggested that the band were still in a state of perpetual flux, with an identity still yet to be fully determined.

Aptly, the recruitment of a new bassist, Dick Lövgren, in 2004, turned out to be an essential final piece in the band’s enduring and confounding jigsaw. With renewed focus and ferocity, Meshuggah have been an unstoppable force ever since. From the gleaming savagery of 2008’s ObZen and the imperious menace of 2012’s Koloss, to the cudgelling career peak and insane riff armoury of 2016’s The Violent Sleep Of Reason, their status as metal’s most inspired and inspiring band has remained unassailable and beyond dispute.

Commercial impact and critical acclaim have both followed accordingly, too. Koloss and The Violent Sleep Of Reason burst onto the Billboard Top 200 chart at #17, Meshuggah’s highest US chart entries to date. TVSOR also conquered Australia’s Top 10 Album chart, while the album’s crushing opening track Clockworks was nominated for a Grammy for Best Metal Performance in 2018. That same year, Meshuggah walked away from Metal Hammer’s Golden Gods awards ceremony with the much-coveted “Inspiration” trophy: a fitting tribute to three decades of mercurial creativity. Meanwhile, as showcased on their celebrated live  documents Alive (2010) and The Ophidian Trek (2014), Meshuggah have become ever more devastating and otherworldly as a live act, too.

2022 brings the release of the Swedish icons’ ninth and most fearlessly creative studio album yet. Full of surprises and yet instantly recognisable as the work of metal’s most idiosyncratic force, Immutable redefines and redesigns the Meshuggah sound, across more than an hour of the most stimulating and absorbing music the band have ever made.

Despite the challenges of the last couple of years, the progressive principles that have always informed their artistic efforts remain as cherished as ever. As we spiral towards a dystopian future, Meshuggah still stand alone.