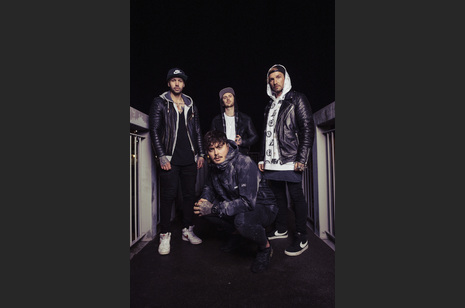 Since forming in York in 2016 from the ashes of their previous bands, InVisions have become one of the hungriest and most promising bands of the British metalcore scene.
With their full-length debut, Never Nothing released in 2017, InVisions engaged in unrelenting touring across the UK, as well as a slot at Download Festival. Their second album, 2019’s Between You And Me, saw them sign to Stay Sick Recordings and continue to build on their already impressive reputation for heavy intensity, and hittingthe road in Europe.

Now InVisions return with their third album, Deadlock, their most complete and ambitious statement to date. Conceived in lockdown and seeing the band take the reins on recording/producer roles, Deadlock had a naturally long gestation period.

Where previously InVisions leaned into heaviness, powering through breakdowns and brutality with a demolition contractor’s expertise, here they wanted to show they have other tools with which to inflict sonic damage. Across its tracks, Deadlock takes a look at loss, frustration and the self-doubt that comes when distractions are at a minimum and life’s question marks begin to loom.
This is Deadlock.