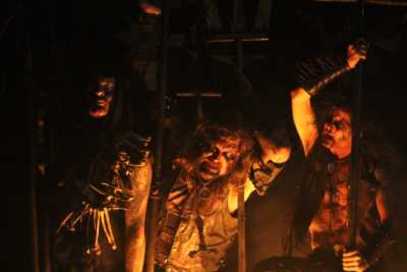 Just in time for Halloween, BLOODSTOCK is excited to announce four more spooktacular bands and add the 2018 Rock Society tickets to the ticket store.

We’re excited to announce that WATAIN will bring their black metal ritual to headline Sunday’s Sophie Lancaster stage in a UK festival exclusive.  Frontman Erik Danielsson tells us, "Our last performance at BLOODSTOCK in 2012 was also the final date on the ‘Lawless Darkness’ tour.  The sun was setting while we played and the crowd was getting louder and wilder the darker it became.  A very charged atmosphere.  Eager now to return and see what the eventful years that have passed and the force accumulated since then has done to both us and the BLOODSTOCK crowd.  Furthermore, England is of course sacred ground when it comes to Metal in general, so when performing there, the stakes are always high.  May all those that doubt be impaled upon them."  Look out for the band’s long awaited sixth studio album arriving on 5th January 2018!

German power metallers, ORDEN OGAN also land a Ronnie James Dio main stage slot on Saturday.  The band released ‘Gunmen’, their fifth studio album, this summer via AFM Records.  Check out the video for ‘Gunman’ here and get a taster of what’s in store for their set in 2018 - https://youtu.be/JPm46Qgyn24.

Atlanta aggrotech outfit, COMBICHRIST also join the main stage bill for an early slot on Friday.  The band have been working on new music after the release of their eighth studio album, ‘This Is Where Death Begins’ which landed in 2016.  Check out the new track, ‘Broken:United’ at the following link - https://Combichrist.lnk.to/BrokenUnited.
Also landing an early main stage slot on Friday are British death/grind four-piece, MEMORIAM.  Combining ex-members of Bolt Thrower and Benediction, MEMORIAM’s pedigree is high.  The band of scene veterans are hard at work on the follow up to their debut, ‘For The Fallen’ released via Nuclear Blast earlier this year.  Check out ‘Reduced To Zero’ taken from that opus here - https://youtu.be/Nmucoieg2Lc.

BLOODSTOCK’s Rock Society tickets become available in the store on Halloween morning, 31st October at 9.00am!  The ‘Rock Society’ is effectively the festival’s ‘Members Club’, offering not only a 10% discount on your weekend ticket (on top of the early bird discount if you purchase the Rock Society membership + ticket bundle option), but all sorts of other cool benefits like priority signing tent access, a Rock Society laminate, access to the VIP Serpents Lair bar, a tour of the backstage & production areas to see ‘behind the scenes’, the chance to meet with the festival organisers, a dedicated hangout area in the Rock Society tent on site, a Rock Society Facebook community where you can make friends and get to know your fellow RockSoc members and plenty more besides.  Full details can be found at http://www.bloodstock.uk.com/pages/rock-society.  Memberships are priced at £75, limited to 300 and sell out almost immediately, so don’t delay if you want to pick one up.
Also now in the store are tickets for our new VANAHEIM campervan field.  Due to increasing demand each year, we've made some site adjustments to allow for more pitches.  As such, the new VANAHEIM site is located across the road, directly adjacent to Serpents Lair VIP parking, allowing an increase in size to accommodate 240 campervans, as opposed to just 130.  Campervan pitches always sold through very rapidly, so this allows for more of our metal brethren to join the campervan club.  Tickets for campervan pitches will remain at this year's price of £60.
With Friday night headliners, JUDAS PRIEST, Saturday night headliners, GOJIRA and Sunday headliners, NIGHTWISH already announced, along with EMPEROR, DEVILDRIVER and NAILS, 2018 is shaping up to be another stellar year for BLOODSTOCK.

BLOODSTOCK’s first wave of Serpents Lair VIP tickets are now SOLD OUT!  The final allocation, the last batch of VIP deluxe packages and a limited amount of VIP upgrades priced at £145 (for those who’ve already bought ‘early bird’ tickets) will then become available on 16th December at 9am in the ticket store.  Mark your calendars and don't delay if you want to join us in 2018’s VIP Serpents Lair, as they’re moving faster than ever before!