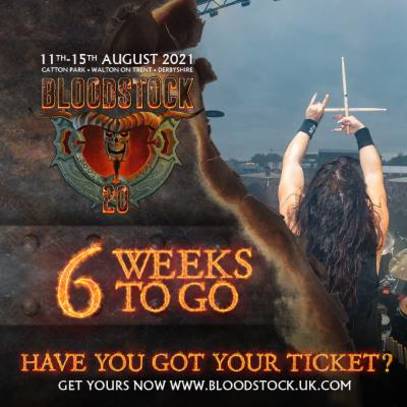 There’s just 41 days to BLOODSTOCK 2021!  We’re counting down the hours before Catton Park opens the gates to the biggest - and longest, at 5 days - metal party of the year!

First we have some bad, but also, good news!  A few more international bands are experiencing issues with travel and logistics and have had to cancel, but we’ve secured some fantastic replacements from UK shores.

Unfortunately, Thursday’s Sophie stage headliner, The Night Flight Orchestra now cannot make it, but Brit metal legends, LAWNMOWER DETH step in to save the day.  They tell us; “We are truly sorry you’re not going to get Night Flight Orchestra. They’re terrific and awfully melodic.  Naturally as the B-TEC replacement for them, we sound exactly the same, so your disappointment should be somewhat abated.  Just think melodic Swedish hard rock, with balloons.  However, the chance to get in a field, well a tent, with you lovely lot and some beer, did we mention beer, is the bar open yet?  BLOODSTOCK, we’re coming!  At our age, slightly slower, but we’ll be there. Bring beer. And dancing shoes. And beer. Love LMD. x”

Stepping into Soen’s slot on Friday’s Sophie stage are sonic heavyweights, CONAN. The British three-piece tell us “We return to Bloodstock, dead eyes ablaze, breath like frost in our lungs as we arise from our slumber.  From a lake of frozen souls, all hail CONAN!”  Check out the doomtastic video for ‘Volt Thrower’, taken from their 2018 album, ‘Existential Void Guardian’ and prep for maximum heaviosity at Catton Park next month from this unholy trinity.

Replacing Lost Society on Friday’s Ronnie James Dio main stage, are BLOODSTOCK New Blood stage alumni, DIVINE CHAOS.  BLOODSTOCK loves helping New Blood bands level up, so are thrilled to offer DIVINE CHAOS the opening main stage slot on Friday!  The band tell us; “BLOODSTOCK is woven into the very fabric of DIVINE CHAOS. Having had the pleasure of playing both the Sophie Lancaster and New Blood Stages, not to mention countless messy weekends as attendees, we are beyond delighted to have the opportunity to play on the Ronnie James Dio stage, long considered the holy grail of UK underground metal. We're eternally grateful for the faith that the BLOODSTOCK crew has put into this band over the years, and can't wait to showcase ‘The Way to Oblivion’ on the greatest of stages.”

Also replacing Savage Master in Friday’s RJD Stage opening slot are British metal collective, LOTUS EATER.  The band’s debut album, ‘Where The Body Goes’ is set for release later this month via Hopeless Records and features their ferocious new single, ‘Obliterate’, featuring a guest slot by Oli Sykes of Bring Me The Horizon.

Thrash beasts SHRAPNEL replace Noctem on Friday’s Sophie stage.  The band inform us “It’s been a long, crazy year, but we can’t think of a better way of getting back to business than playing at BLOODSTOCK!  It’s the 20th Anniversary, and our first time at BLOODSTOCK with our new line up, so it’s going to be a special one.  We can’t wait to finally blast some of ‘Palace For The Insane’ for you, and we’ll see you in the pit!”.  In the meantime, warm up your necks with some ‘Winds of Slaughter,’ taken from that same album.

While Blasphemer also had to cancel, NECRONAUTICAL bring their British black metal wares into their spot on Sunday’s Sophie Stage.  Frontman/guitarist Naut tells us, "We are thrilled to be granted the opportunity to perform at this year's BLOODSTOCK. After over a year in wait, it will be an incredible experience to meet with the fans for our return, and right before the release of our new album "Slain in the Spirit"!  In spite of the short time to prepare, we guarantee the audience at this year's BLOODSTOCK an epic and immersive Black/Death metal experience they will not soon forget!  See you at the Sophie stage on Sunday night!".  Also check out the video for ‘Hypnogogia’, taken from their upcoming album, ‘Slain In The Spirit’, set for release in late August.

Last but not least, dark metal squad, SPECTRAL DARKWAVE join Sunday’s Jager stage line up.  Describing themselves as “a hi-definition musical tour of human horror in sonic technicolour”, you know you’re in for something unique!  If you’re as yet unfamiliar with the band, check out their 2019 video for ‘A Toll Is Due’ and make your own mind up.

In after hours entertainment news, the legendary VIP Area ‘Silent Disco’ is returning in an expanded format!  VIP-ers will still get their Silent Disco on Friday and Sunday in the Serpents Lair tent, but on Thursday and Saturday, the Silent Disco will kick in from 11pm until 2am over in the NewBlood tent.  Headsets are at limited capacity, so availability is on a ‘first come, first served’ basis.  There’ll be two channels, DJ Rich Harris (Total Rock, Desertfest) will be manning the metal/rock channel and DJ Lloyd Rust (Bearded Theory, Truck Festival) will be spinning the cheese on the pop/disco/dance channel. Expect Vader to Vengaboys, Machine Head to Madonna; one channel permanently playing metal & alternative and the other playing all your guilty pleasures from the 1950’s to present day.

On 9th July, our friends at PLANET ROCK RADIO are launching a BLOODSTOCK radio pop-up station showcasing music from many of this year’s acts like Judas Priest, Kreator and The Wildhearts, as well as others from BLOODSTOCK’s past such as Slayer, Nightwish, Machine Head, Gojira, etc to celebrate BLOODSTOCK’s 20th Anniversary.  The channel will run for 3 months and is available on Planet Rock’s premium app, the Planet Rock Radio website and via smart speakers.  Fans can get a month’s free subscription to Planet Rock Premium (in addition to a 7-day free trial period) using the code ‘Bloodstock’.  Start your BLOODSTOCK party early by tuning in from next Friday!  More info here.

Standard weekend tickets for the extended, now 5-day event in 2021 remain under a temporary price freeze at £145 (+ booking fees). In addition, child tickets and parking tickets for 2021’s event are available now at the ticket store, as well as a limited number of day tickets. VIP and campervan tickets for 2021 are sold out.

Grab your BLOODSTOCK merch here, including new t-shirt designs, an all-new tracksuit, mugs, leather wristbands, beer cups, various hoodies, a huge range of various patches for your battle jacket and much, much more.