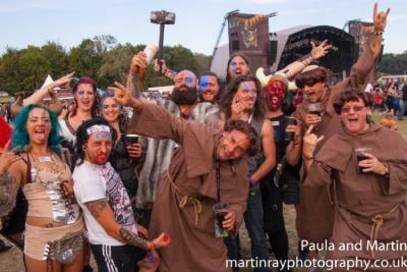 BLOODSTOCK has a ton of exciting news this week as the festival gets ever closer!  In hugely exciting news, on Friday afternoon over on the Sophie Stage, we’re bringing you a very, *very* special ‘surprise set’ from an internationally renowned band.  We can’t tell you any more, so you’ll just have to come along and see!  You’ll be kicking yourself if you miss it!

In a final bonanza of bands for 2022, BLOODSTOCK can also reveal a whopping 22 more bands to entertain the metal hoardes at Catton Park next month.  Plus, there’s news on this year’s fancy dress theme, face-painting, exclusive ents for those with Serpents Lair VIP tickets, and there’s still Facebook Lives to come with GWAR and MALEVOLENCE where you can put your question to the bands.

Unfortunately, ENFORCED, ALL HAIL THE YETI, and SACRED REICH have had to cancel, but BLOODSTOCK has been hard at work to fill their spots and more besides, to round out the 2022 line-up. With the news that SACRED REICH can’t make it, the very capable face-melters SYLOSIS step into the breach, they’re the meat in an impressive LORNA SHORE - JINJER main stage sandwich on Saturday.  While you’re waiting for the new album they promised for 2022, have a listen to past glories on Spotify here or last single ‘Immovable Stone’.

Good news for HEART OF A COWARD fans!  With a little bit of juggling going on, the pulverising metalcore massive will be stepping up from the Sophie Lancaster stage to the Ronnie James Dio main stage on Friday, filling ALL HAIL THE YETI’s spot who sadly had to pull out of their Summer European run.

Opening the Sophie stage on Saturday are Planet Rock Radio’s competition winners, the hooky modern metal crew SISTER SHOTGUN.  Hailing from Birmingham, the band declared, “We are so excited and honoured to be playing Bloodstock. It feels like a really special moment for us as we’ve been coming to the festival for a number of years, so to finally be on that stage performing will be incredible. We absolutely cannot wait!”  Check out their single ‘Sacred Heart’ here.

With the very last Metal 2 The Masses finals for 2022 now wrapped up, BLOODSTOCK can also reveal the remaining bands added to the New Blood stage…

Saturday’s last two additions come in the shape of metal bruisers AMBRIUS, who just dropped their debut EP ‘Effigies Of Time’, and the victors from Norway’s final, melo-death thrashers VICTION, inspired by Gojira, Metallica, Arch Enemy, Behemoth, and Sepultura. They add "We are beyond honoured and excited to be able to play at Bloodstock! This has been an incredible journey and we wish to thank everyone involved with Metal 2 The Masses for this opportunity, we promise to deliver an immense show and the best Norway has to offer."

Over on the Jagermeister stage, BLOODSTOCK’s pleased to say you’ll also be able to catch the eclectic, undefinable ALL HAIL DOG, brutal death metallers VULGAR DISSECTION (for fans of Cannibal Corpse, Suffocation, and Ingested) and alt merchants of riffs, melody, and groove, SYNCOLIMA on Friday, with Leicester sludge/doom trio BILE CASTER joining the shenanigans on Saturday, and skin-peeling thrashers DETOXEN rounding out Sunday.

If you’ve SERPENT’S LAIR VIP tickets, there’s a boatload of exclusive bands & DJs for you, including not least fun-packed tributes to Billy Idol, Bryan Adams, and Blondie (Icons On Tour on Friday), and Meatloaf (Paul Lee on Saturday), MEZZOTINT (one for fans of Fields Of The Nephilim), funky electric blues from MARTIN FERAL, plus comedy & cabaret over the weekend. On Sunday, you won’t want to pass up seeing Slipknot fan CALEB H, an outstanding drummer of just 7yrs of age and a viral sensation who’s appeared on ITV’s Game Of Talents and The Ellen Degeneres Show.  You may have seen him on stage with Jay Weinberg at Slipknot’s Birmingham Arena show in 2020!  There’s also a chance to join in with some Bandioke, courtesy of REKOVERED.  Not only that, HELL BENT FOR METAL, the LGBTQ+ heavy metal podcast, will be doing a live recording from the Serpent's Lair, giving its platform to BLOODSTOCK's LGBTQ+ community to talk about their experiences of being out at BLOODSTOCK, other festivals, and the metal scene in general. For more info, DM them through one of their social media platforms.  Film fan?  Be sure to check out cool rock n’ roll flicks from Corrosion Of Conformity, Alice In Chains, and Hawkwind at 1pm every day Fri-Sun, preceded by 10am family movies if you’ve little ‘uns with you. There’s also the usual enormous array of 120+ beers, ales, and ciders at the bar, including new additions from Titanic Brewery, Peakstones Rock Brewing Co Ltd, Black Country Ales, and Dancing Duck Brewery to name a few (and there’s 40+ at the main arena bars too). Get the latest on everything Serpent’s Lair here.

Besides joining in with BLOODSTOCK’s ‘wear something pink’ initiative for Sylvia and The Sophie Lancaster Foundation on Sunday, for those of you who’d like to be still more extravagant, “Stranger Things” will be Friday’s FANCY DRESS theme for 2022. Channel your best Eddie Munson, Eleven, or Dustin, BLOODSTOCK wants to see your ultimate 80’s style fashion (inc Hellfire club t-shirts) running up that hill. Obey your master!

Have your mini moshers in tow or just feeling inspired by headliners BEHEMOTH or  MERCYFUL FATE? Forgot to pack your own corpse paint? You will definitely want to visit the FACE PAINTING stall from FESTIVAL PRIDE in the main arena all weekend.

Ready for some gaming showdowns in the Nordic Spirit Gaming Arena? As well as games galore to play with your mates or on your own, YouTuber DAZ BLACK will be checking out an almighty shredding battle, as BLOODSTOCKers compete to take the title of GUITAR HERO. Yes, you can compete dressed as Eddie Munson (see above) if you wish.

Don’t miss BLOODSTOCK’s next Facebook Live at 7pm BST this WEDNESDAY 20th July with festival management in conversation with the mighty Blothar the Berserker of GWAR! Pose your best questions in real time to Blothar and/or BLOODSTOCK and keep an ear out for spot prizes too!  The final special guests for a Facebook Live chat with BLOODSTOCK will be Alex & Kon from MALEVOLENCE on Thursday 28th July at 7pm BST.

If you've already got your ticket ordered, maybe you’re now thinking about how best to get to Catton Park?  BLOODSTOCK is pleased to support two sustainable travel options - Big Green Coach (who’ll drop you & your gear right inside the festival gates for minimal walking, from 33 locations around the UK.  Reserve your seat for just a tenner) and Liftshare (a safe way to offer up a spare seat in your car, or nab one in someone else’s & make new friends to boot).  Get more info on both options over at BIG GREEN COACH and LIFTSHARE.

All BLOODSTOCK VIP and campervan packages are sold out. Don’t miss all the fun! You can still snap up the remaining standard weekend camping tickets (just £145 + fees for 4 days of heavy metal glory) plus day & child tix are also available at the ticket store. Headbangers below age 4 can come for free!