BLOODSTOCK BEEF UP & PREPARE FOR BATTLE! 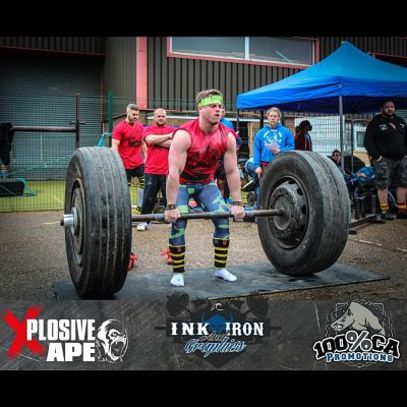 There’s  less than 100 days until BLOODSTOCK 2016!!  While we’ve been revealing many killer bands for you to mosh to all festival, there’s plenty more on-site to see and do besides watch the awesome bill (and for regulars, we don’t mean bin-jousting or Deli Kate)!  BLOODSTOCK knows the meaning of both heavy and metal...!

While you might be feeling a little weakened at times over the weekend (especially if you’ve been taking advantage of the real ales on site), BLOODSTOCK are delighted to welcome some of the strongest people in the world to the festival!  For the first time, BLOODSTOCK and the 100% CA team will host 2 special strongmen events. On Saturday, 20 top athletes from across Europe will compete for the title of ‘Europe’s Strongest Man Under 90kgs’. Then on Sunday, see what pure strength is all about, in the ‘BLOODSTOCK’s Strongest Man’ challenge, showcasing some of the biggest and strongest competitors handpicked from around the world.  Don’t worry, they’re not planning a face-off with festival attendees, but we wouldn’t recommend spilling their pint.

Over the 2 days, the athletes will complete 2 events in each title, including a max deadlift event, and we hope to see 400kgs pulled on Sunday!  Plus, an overhead log-press for reps, a loading medley consisting of 5 objects, 2 which weigh 19 stone!  Not to mention, a gruelling back-to-back tug of war. Joining us, will be World’s Strongest Man and Arnold’s competitor, the South of England’s Strongest Man Rob Frampton, and Dave Meer, the local Tamworth multi-record-breaking strongman who has competed in the UK’s Strongest Man numerous times.  With the support of XplosiveApe, USN, and Rebel Strength, we will be bringing you the best in the country!

If swords and armour are more your thing, don’t miss the ferocious BATTLE OF THE NATIONS UK historical fighting team, on site from Friday-Sunday!  BLOODSTOCK is thrilled - if slightly trepadacious - that they can lay waste to Catton Park again this August. The UK Federation regularly compete around the world, and are ranked among the very best.  Look out for their regular “demonstrations” (by which we mean, a no-holds-barred full-contact scrap with broad swords, maces, and an array of other brutal Medieval weaponry) in the main arena.  We wouldn’t recommend spilling their mead either.

Field Captain Rob ‘Moose’ Morris comments, “BLOODSTOCK is always the most popular event we host in the tournament calendar.  The unique atmosphere and amazing music always combine to a complete unreal experience.  Showing the music fans what being a real metal-head involves; wearing 16kg of armour and caning the hell out of your opponent in August!”  Wish them luck with their BLOODSTOCK warm up this month, taking on the Battle Of The Nations World Championships in both the classic 5v5 Bohurt and female fighter categories.

On the musical side, already announced for 2016 are our three headliners, TWISTED SISTER (in their last ever UK show), MASTODON and SLAYER, plus special guests BEHEMOTH, GOJIRA and ANTHRAX.  Also on the bill are FEAR FACTORY, CORROSION OF CONFORMITY, SYMPHONY X, SATYRICON, PARADISE LOST, DRAGONFORCE, METAL ALLEGIANCE, STUCK MOJO, ROTTING CHRIST, MISERY LOVES CO, GHOST BATH, VENOM, UNEARTH, DIAMOND HEAD, GOATWHORE, ACID REIGN and many, many more.  Additional bands are being announced regularly so keep up to date via BLOODSTOCK’s official sites at www.facebook.com/bloodstock and www.bloodstock.uk.com, or via Twitter on @BLOODSTOCKFEST.