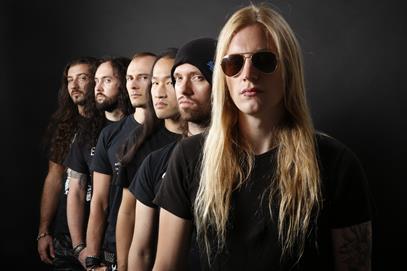 After recently revealing TWISTED SISTER’s final UK show and the mighty MASTODON as two of their three main stage headliners for 2016, BLOODSTOCK is excited to announce three more main stage bands for next year’s event.
Power metal fans rejoice!  Be sure to practice your air guitar skills in advance, because the shredtastic DRAGONFORCE have confirmed that BLOODSTOCK will be their only UK show in 2016!   Guitarist Herman Li informs us; "It’s been over 10 years since DragonForce played Bloodstock, and both of us have come a long way in that time.  Back then, we were a new band with only our debut album out, and Bloodstock was a smaller indoor festival, but still a magnet for true, die-hard rock & metal fans, just as it is today.  We had some of our best times that year at Bloodstock and felt great excitement at being invited to play.   That excitement is just as real today having been invited back again, only this time it's even better because I won't need to pack the gear and drive up there in my car with Sam Totman as my map reader!!"
British doom pioneers, PARADISE LOST also join the bill for their only UK show of 2016. Guitarist Greg Mackintosh comments “It is great to be confirmed to play Bloodstock 2016!  We haven't played there since 2012 and we had a blast. It will also be our first UK festival appearance since the release of our new album, ‘The Plague Within’.  We look forward to seeing you all there and adding the doom and gloom to Bloodstock 2016.”
Greek extreme metallers, ROTTING CHRIST will also blaze into Catton Park for their only UK show of 2016.  Frontman Sakis comments; “We’re very proud to be coming back to the biggest metal festival in the United Kingdom!  Bloodstock, let's create hell on earth next year!  Until then...keep the spirit alive!”