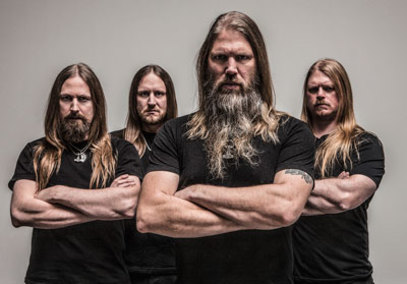 BLOODSTOCK is thrilled to announce a bumper batch of Ronnie James Dio main stage bands for 2017, including their Friday night headliner!

Prepare your drinking horns!! Swedish overlords, AMON AMARTH will be sailing their Viking longboat on to the Catton Park shore as Friday night’s headline band!  Chief berzerker Johan Hegg declares, "What's up UK!  On August 11th 2017, we are invading BLOODSTOCK!  It's going to be a fucking awesome party, with immense bloodshed and you better be there!"  Get ready for battle and raise your horns with us via their latest video at https://youtu.be/Ndu33Uv7Aco.

Landing the special guest slot on Friday are power metal kingpins, BLIND GUARDIAN.  Their set will be a UK exclusive for 2017. BLOODSTOCK prides itself on being by the fans, for the fans, and are pleased to welcome one of the fans most requested acts to the lineup. If you’re not familiar, you’ve three decades of music to investigate, but why not start with the more recent ‘Twlight Of The Gods’, at: https://youtu.be/Ep1B_aIFPDE.

Bay Area thrash beasts, TESTAMENT are set for a Friday slot.  With their crushing brand new album, ‘Brotherhood Of The Snake’, released just a week ago by Nuclear Blast, check out the awesome video for new song ‘The Pale King’ at https://youtu.be/wkHT86Ei7DY.

Hardcore kings, HATEBREED make a welcome return to Catton Park on Saturday. Check out their video for ‘Looking Down The Barrel of Today’ from current album, ‘The Concrete Confessional’ here - https://youtu.be/eGOr91Wx4DM.  Expect firebrand frontman, Jamey Jasta to play ringmaster to some epic circle pit activity, so get your pit skills honed in preparation!

Early bird weekend camping tix are already on sale at a discounted £120 and due to exceptional demand, a limited number of VIP packages were put on sale last month on a first come, first served basis.  This allocation has now SOLD OUT!

VIP sold out well in advance in 2016.  VIP upgrades (for those who’ve already bought an early bird ticket) and the remaining VIP allocation will be available from 16th December, but don’t hang around if you want these, as they will sell out even earlier for 2017.